Description: The Colorado General Assembly has passed SB21-116, concerning the prohibition of American Indian mascots in Colorado...The Native American Guardians Association Intends to Sue Colorado Over The Constitutionality of SB 21-116.

The Native American Guardian's Association Intends to Sue Colorado Over The Constitutionality of SB 21-116.

NAGA Announced to the Media in a Press Release dated June 19, 2021 that the organization plans to pursue litigation against the State of Colorado. 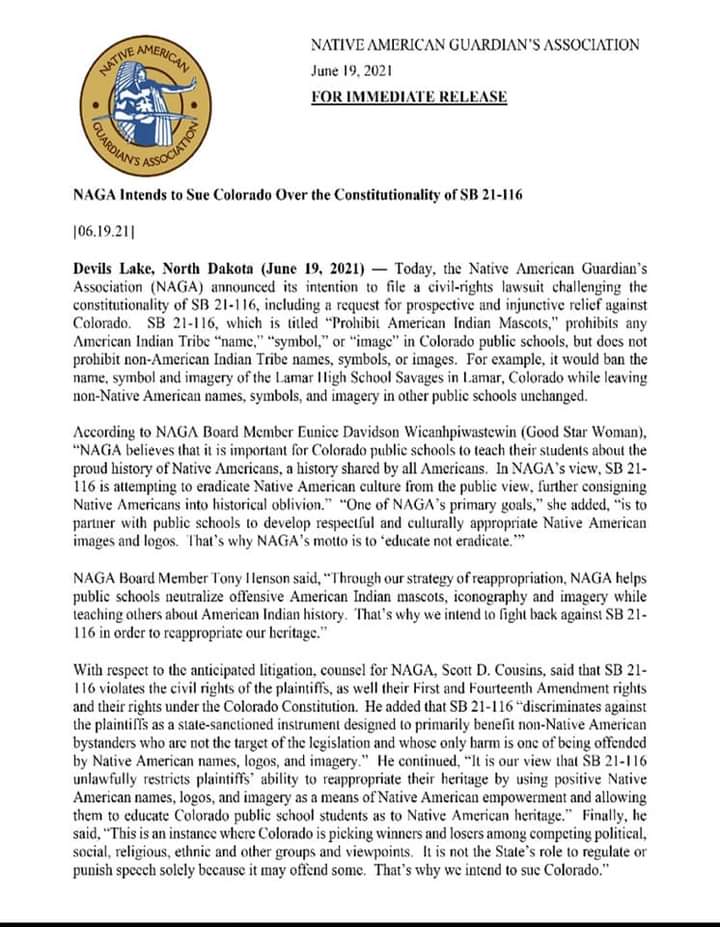 Counsel for NAGA, Scott D. Cousins, said that, "It is our view that SB 21-116 unlawfully restricts plaintiffs' ability to reappropriate their heritage by using positive Native American names, logos, and imagery as a means of Native American heritage." Finally, he said, "This is an instance where Colorado is picking winners and losers among competing political, social, religious, ethnic, and other groups and viewpoints. It is not the State's role to regulate or punish speech solely because it may offend some. That's why we intend to sue Colorado."

"The Colorado General Assembly has signed and sent to the Governor SB21-116, concerning the prohibition of American Indian mascots in Colorado.  This bill would impose $25,000 for monthly fines for non-compliance beginning in June 2022.  The Lamar School District Board of Education is currently gathering information and consulting legal counsel. The Board will hold community forums and focus groups to gather input from Lamar residents. Information related to when the events will be held and how the community can participate will be provided in the coming weeks and will be posted on the District website and Facebook page."