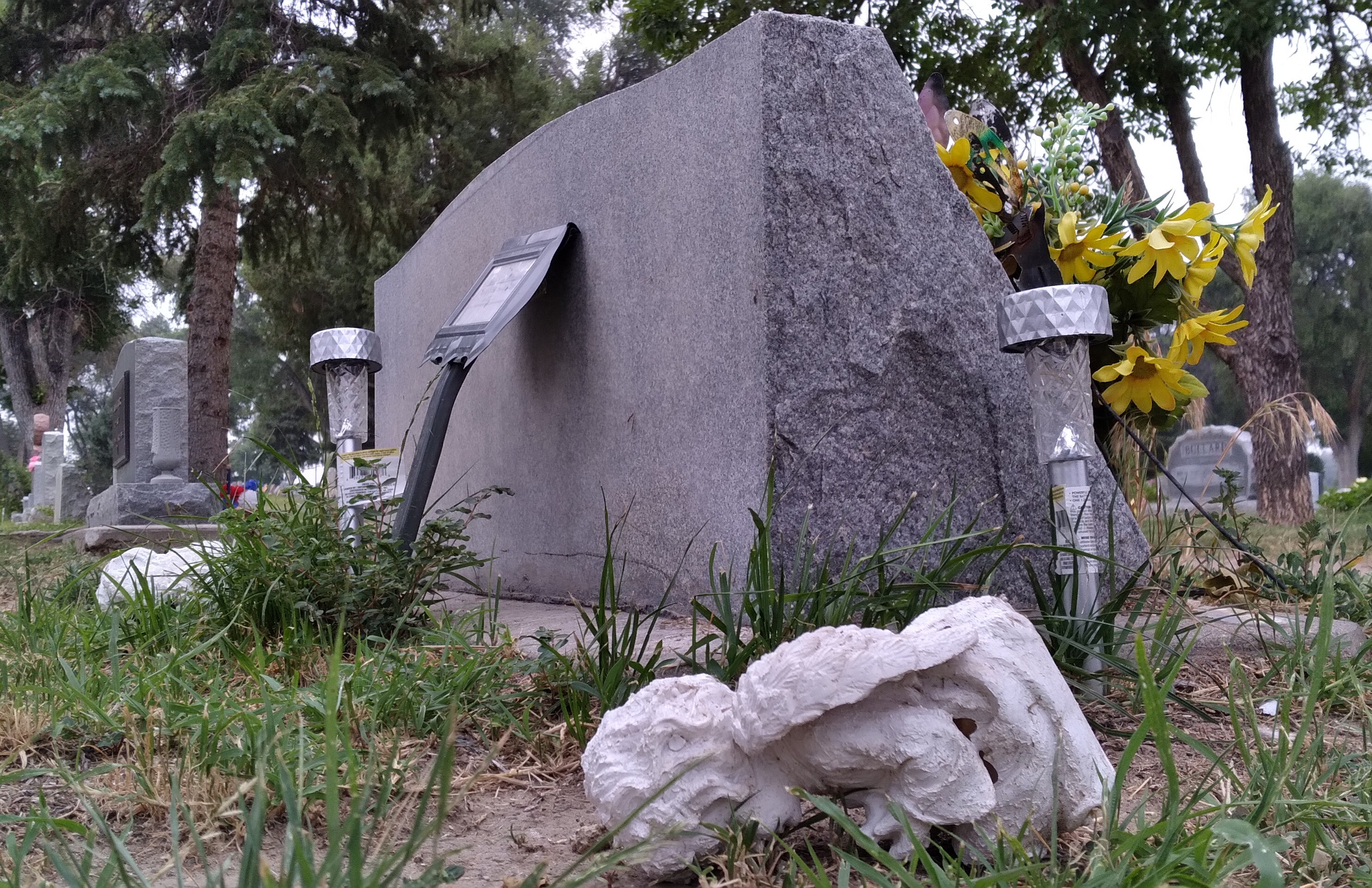 This vase that once sat on a tombstone was found smashed when cemetery workers arrived this morning.

Listen to the Interview Here:

SECO News: This is Adrian Hart with your Southeast Colorado News on seconews.org and with me is Park and Rec Director for City of La Junta Brock Hinkhouse. Brock's got a lot of scope in his realm at work including all of the parks and trails in La Junta as well as both cemeteries the Calvary Cemetery and Fairview Cemetery in La Junta. And Brock gave me a call this morning. Good morning Brock, how are we doing?

SECO News: Given conditions, I guess. It's always better to see you over at the swimming pool wearing the other hat or at the soccer games doing some of the rec stuff, than here at the cemetery, we hear some mowing going on in the background. So your guys get out here early. Right?

Hinkhouse: They do. They come in about five in the morning.

SECO News: So this morning, they came in and they gave you a call and they reported something.

Hinkhouse: They did, they gave us a call for some vandalism and it's the fourth one that we've had, so we're trying to maybe get everybody a little bit more vigilant out there and kind of watch what's going on.

The police department's been involved of course and they're trying to do a good job of watching what happens here. We believe it's happening overnight.

A lot of the public has been involved with each one of these cases has said that we need to put gates up. It would be near impossible to completely lock down the cemetery at night.

SECO News: You want to let people be able to grieve at their time of grieving when they so choose and need to leave it open to the public so that they can see their loved ones.

Hinkhouse: Yeah. And at this point we don't believe that they're driving through with a car.

SECO News: Right, it's on foot.

Hinkhouse: So you know it's been a little different situation each time and we just want everybody when they drive by to maybe take a look and see what's going on.

SECO News: We understand the police are busy, but we want to pay some attention to our loved ones and honoring their memories.

So this has happened, you've had four incidences and you've had them on both sides so Fairview side most recently, and then Calvary side prior to that.

Hinkhouse: Yep, we've had three on Fairview and one on Calvary.

SECO News: Okay and it seems like, I kind of feel like I got to call it for what it is, if we've got someone vandalizing particular families' grave sites. That's a couple of incidences that was the case. Right?

Hinkhouse: That's the case you know we had, I believe, two of the four have been. You can kind of see that as possibly a family thing. The other two it was just somebody walking through and knocking stuff over.

Hinkhouse: There's been some tipping over of headstones that has happened, those are the ones that I think are a little bit more random. But yeah, we're seeing just a little bit of everything.

SECO News: Yeah, trying to be vigilant on it, and like we're saying honor our loved ones in their resting place here, so keep an eye open. Yes, if you see traffic late at night, maybe give a ring.

Hinkhouse: Yep, and if you if you come out here and visit the loved ones grave site make sure that you don't have anything that's torn up or damaged.

SECO News: Oh yeah, if you see it give the city a call and let them know that there's damage out here.

SECO News: So that we can deal with it right away.

Hinkhouse: Our cemetery crews do a good job and they try and keep an eye out on everything too and they let us know and they let the police department know, but if you see something definitely let us know.

SECO News: Awesome, thank you so much for your time Brock. More importantly, thank you for your service to the community.

Hinkhouse also said that the city is considering installing trail cams to deter future vandalism at both Calvary and Fairview Cemeteries.