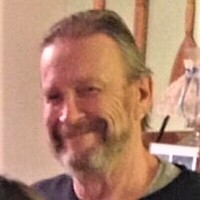 Description: Timothy Watkins Obituary...Our Heartfelt Condolences To His Loved Ones...

Timothy was born in Salem, OH on March 16, 1953, a son of Jo Anne (Creighton) Watkins, of Chandler, AZ and the late Joseph Ezra Watkins, Jr.

He was the husband of Sylvia Diane (Blue) Watkins, they were married on May 26, 1988 in San Bernardino, CA.

He attended the Nazarene Church when he lived in California.

He served in the U.S. Air Force during the Vietnam War.

He retired as an auto technician from the California Highway Patrol.

Tim was a man with many talents and hobbies. He loved to work on his old truck, woodworking, and computers. He was the 'Go to Man" for many of his friends and his knowledge in these areas will be missed by them. Tim loved to get together with his family and friends for barbecues and holiday meals. He was a gentile man who was quick to laugh or cry at movies and Hallmark commercials! Tim was an animal lover and was a wonderful "father" to many cats and dogs during his life. He will be Forever in our Hearts and never Forgotten!

Per his request there will be no services. Family and Friends will celebrate his life at a later date.

Arrangements have been entrusted to Ford - Ustick Funeral Home. Online condolences may be sent to www.fordustick.com.