An Update on the Colorado Main Street Open for Business Grant 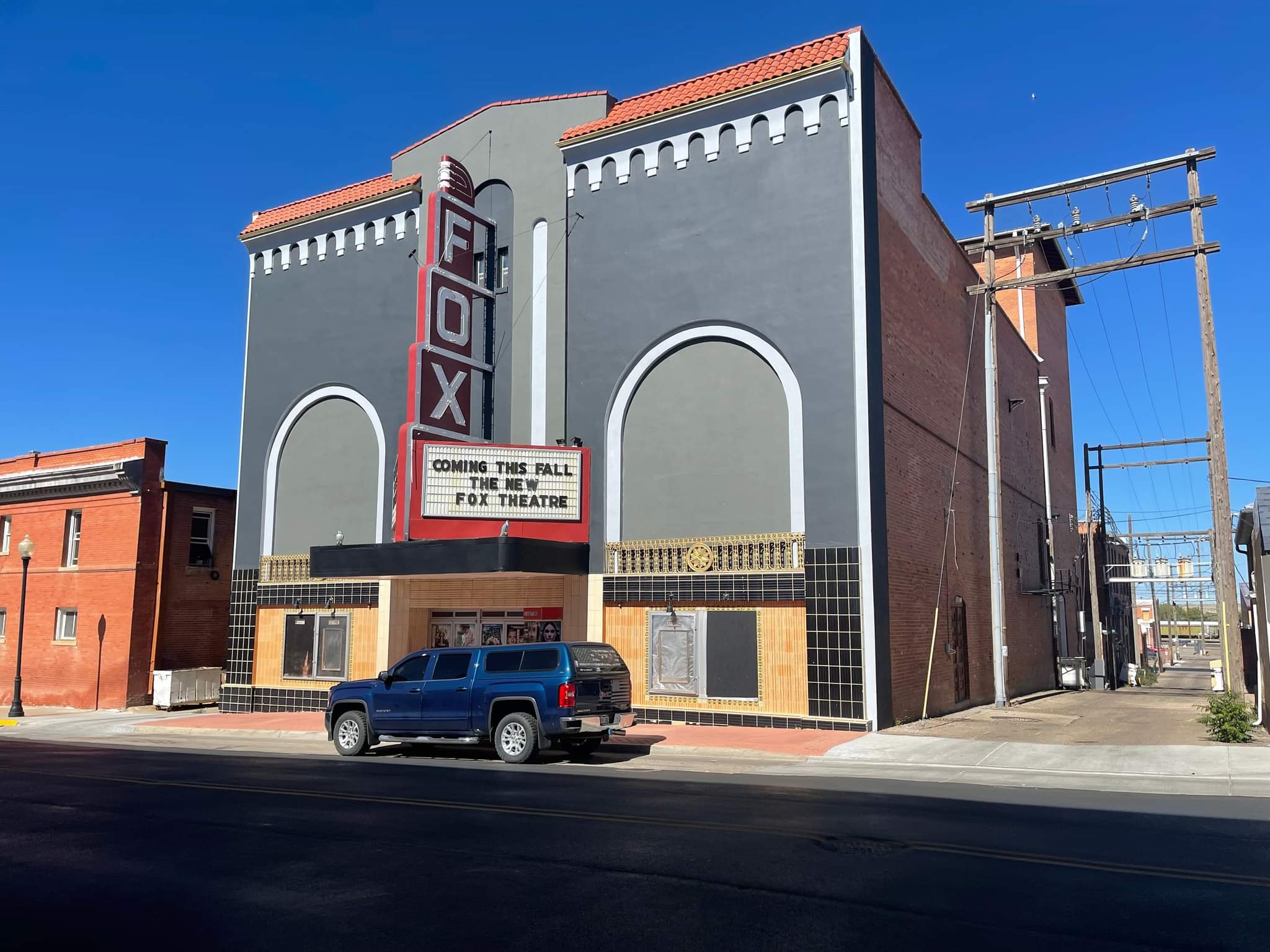 Description: The Recently Renovated Fox Theatre of La Junta is a recipient of the Colorado Main Street Open for Business Grant. (Courtesy Photo)

An Update on the Colorado Main Street Open for Business Grant

In 2021, the City of La Junta was a successful applicant to the groundbreaking grant, Main Street Open for Business (MSOB).  Let’s take this opportunity to give you a brief glimpse a grant that is a game changer for six businesses in downtown La Junta.

The Colorado MSOB program is a GRANT PROGRAM.  That means that it is a competitive process - not all applicants received full or any funding. In fact, the City of La Junta was one of 13 municipalities to receive a general grant - 48 communities applied.

MSOB supports façade improvements and energy efficiency projects for businesses in the state’s traditional downtowns with $6.72 million in funding set aside by Senate Bill 21-252 for the Colorado Main Street Program, housed with the Colorado Department of Local Affairs (DOLA).  The MSOB initiative must demonstrate increased sales and revenue for rehabilitated buildings, reduce energy consumption and lower utility bills, and create jobs while retaining existing ones.  Communities with multiple projects to improve visual appeal and provide a catalytic ripple effect of investment in downtown districts were given priority.

MSOB has a very aggressive time frame. Colorado Main Street received funding on July 1st, 2021, and all work must be completed and paid for by June 30, 2022.

MSOB is a new state program, which means new rules, guidelines, and application, that is vetted through key stake holders, including other government agencies (such as History Colorado State Historical Fund, Colorado Energy Office, and History Colorado’s State Historic Preservation Office). Eligible and ineligible expenses, as well as eligible and ineligible businesses, were carefully vetted by staff for impact.

Municipalities, counties, and councils of government were designated as the entities eligible to apply on behalf of their downtown businesses – and had only until Aug. 23 to do so. In addition to addressing a host of application questions – from the ability to administer a grant of this nature to being able to complete the work in a very short amount of time, to demonstrating the economic impact the work would have in the downtown. All applicants had to include before photos and after concepts for each proposed project, provide contractor cost estimates for the work, and agree to the reporting requirements needed by the state to prove impact

The MSOB review committee looked at 48 applications representing 380 businesses across the state, requesting a total of over $21 million dollars. They scored the applications based on the responses, and narrowed down to the amount of funding available – $6.97 million to 13 communities for 105 businesses. Grant agreements were in place by the end of September – a herculean effort!

The gist of the MSOB program is that it is a grant program within a grant program.  Eligible entities, such as the City of La Junta, applied for the grant with details concerning administration and capacity, readiness, needs assessment, and alignment with city and community goals. . Individual building/business owners’ projects were reviewed by the team based on eligibility and eligible expenses as defined in the grant application.

La Junta received 18 sub-applications, which were scored based on:

·        Approved by the Certified Local Government

·        Acknowledgment of quarterly report requirements ( sales increases and the number of FT/PT jobs to demonstrate economic return on investment); and

·        Acknowledgment to provide any information on any additional potential private investment.

There was more! Eligible sub-grantees also had to agree to have businesses in place by June 30, 2022, if they were currently vacant. In addition, the property had to be free of all municipal and county liens, and judgments or encumbrances of any kind.

Colorado Main Street and MSOB must follow rules and protocols related the state statue to fulfill their obligations as well.  Compliance is complicated but typical and necessary in the grant world.

How did the City of La Junta manage to apply successfully?

Two of the review key criteria for MSOB due to the short timeframe was if the proposed projects could demonstrate the metrics (increased sales and jobs, decreased energy use) and be completed by June 30, 2022 – no easy feat with the current demand for contractors and building supplies. This also means confidence in the applying agency to administer a grant of this scope.

Another factor was demonstrated outreach. The City of La Junta was able to win points here by demonstrating the MSOB opportunity was communicated on Facebook, in The La Junta Tribune Democrat, on KBLJ, through SEBREA, and at La Junta City Council meetings.  An application and instructions also were listed on the La Junta Development website, chooselj.com and the City of La Junta website.  In addition, all eligible businesses were sent a letter about the opportunity.

To stay informed of any future opportunities, be sure to check: www.chooselj.com, www.lajuntacolorado.org, or SECO News for updates.

Per the requirements of MSOB, the first level of review was performed by a La Junta Certified Local Government subcommittee, who looked for any work that might destroy the integrity of materials or spatial relationships in the buildings requesting rehabilitation funds.

The second review round was reviewed by a subcommittee of the La Junta Urban Renewal Authority for compliance with the various MSOB rules and guidelines.

The last committee, which was comprised by the Director of Economic Development, the Director of Tourism, and the City Engineer—all seasoned grant writers and grant recipients—reviewed and scored  the applications with an eye towards MSOB rules and guidelines AND grant presentation, i.e., what was most fundable and shovel ready.  Any questions about the grant applications during the second level of review were vetted with the MSOB staff to determine if determinations from the committee were in alignment with the grant guidelines. .  By the third round of review, eight grants were gleaned from the pack and submitted with the application for funding.  Two applications were eliminated by the state because they were deemed to be connected to corporate chains.  That left us with six subgrant awards totaling $391,566.84 with a 20% match by La Junta Urban Renewal.

FYI:  The La Junta Urban Renewal Authority voted to supply up to $100,000 for the 20% cash match, which highlighted community support and support for the grant program, strengthening the application. La Junta Urban Renewal agreed to provide the required cash match due to the extreme public benefit of the project by addressing blight in the TIF district.

Letters were mailed to all the 12 unsuccessful applicants, and contact information was provided so that they could ask questions as to why they were not selected. This is a standard practice of funders – in fact, it is how the state notified unsuccessful MSOB applicants. Funders are always happy to help make applications better – this is true at the state and with the City of La Junta. Please do contact me if you have questions.

·        CaSandra Thomas, $51,254.07 for windows on the south, east, and north sides of the property at the southwest corner of Santa Fe and 4th Street excluding the tattoo shop.

The funded candidates received notice via email and telephone calls.  Next steps were to set up an administrative system with the City of La Junta Finance Department, develop contracts, cut checks for half of the award for each funded project, and to meet personally with all six successful applicants to sign contracts and discuss the contractual requirements.

Since then, I have been monitoring the success and challenges of those awarded and am poised to complete the second quarterly report to Colorado Main Street this month.  In addition, MSOB staff has offered monthly trainings and peer exchange sessions with awardees, standardized templates to reduce administrative burden, and one-to-one calls to assist with refining processes and procedures.  Grant administration is always a work in progress.

More than half of our MSOB sub-grants are at the halfway mark in their scopes of work, which is excellent news.  It would be beneficial for all Coloradans if the MSOB grants became a permanent offering for our small towns so that we can keep chipping away at blight and decay and replace it with vibrant centers of commerce.

Gayle Langley, State Coordinator for the Colorado Main Street programs states “This new and innovative program is a game changer for our communities. It will transform our downtowns, and be a catalyst for future economic sustainability. Because of the overwhelming response and feedback from our awardees, we are hopeful, that this program will be funded in future years.”

Please send me a short email expressing your gratitude for MSOB and all it has done for La Junta. cynthia.nieb@lajuntacolorado.org

The more specific you can be, the better for MSOB.  And you might want to mention that you or someone you know would like to apply for funding in 2022.  I’ll forward these emails to Colorado Main Street as proof that MSOB is changing our lives and communities.  Let’s support MSOB!