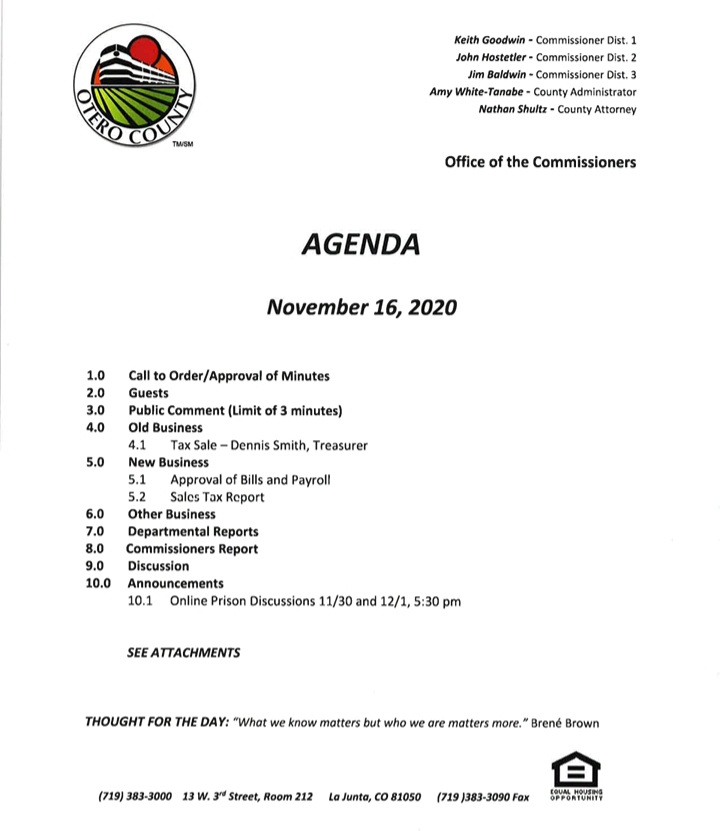 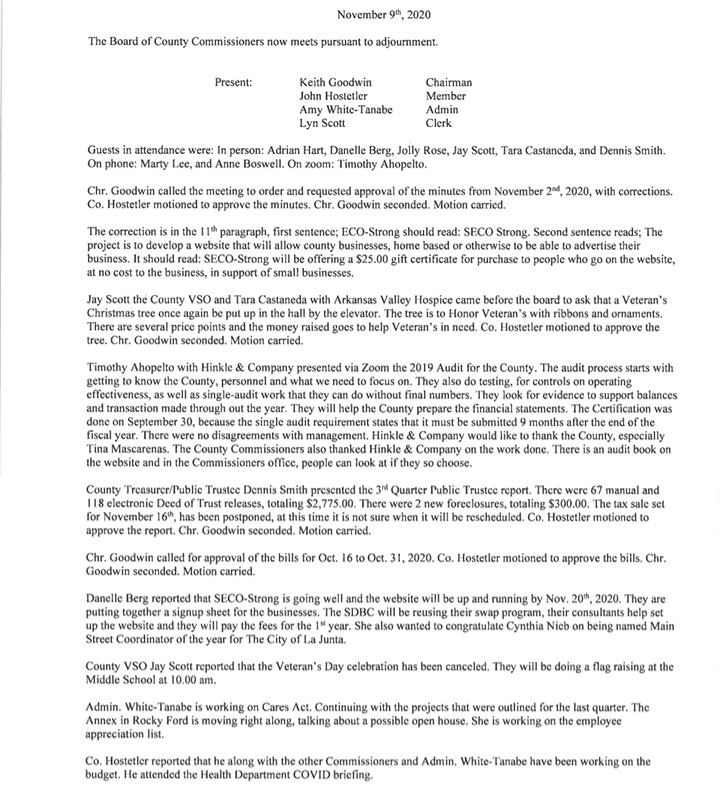 During audience participation Darryl Johnson from the West Assembly of God in Fowler and Stephen Anderson from the Faith Baptist Church in Fowler made appeals to the commissioners. In short they asked that Otero County follow El Paso County in allowing places of worship to operate without restrictions on gathering size.

Anderson said, "Follow the example of other counties in Colorado, including El Paso County, over this past weekend to exempt churches from the restrictions on gathering sizes. They moved to level orange, which we moved to recently and in doing so they noted a federal lawsuit, which was won and is being appealed by the governor's office, but I believe the evidence would suggest it's going to be won in the appellate court."

"The Federal Court decision was that the Governor's Office has no liberty to exercise restrictions over gatherings for houses of worship, churches, synagogues, and mosques included. I think it is an appropriate recognition that civil governance doesn't have the liberty to tell the church what they can and cannot do. So, my appeal to you is not a request for you to give us an exemption as if I'm suggesting you have the authority to take away the liberty from us in the first place. By insisting that there are restrictions maintained on churches what you're doing is making criminals out of citizens and pastors and congregants who have no interest of doing anything illegal, rather they have an intense interest in doing what we believe The Lord has called us to do...You have to recognize this nation was founded primarily and principally upon the backs of those who sought liberty in religious exercise. Pilgrims... Thanksgiving we are about to celebrate... the puritans left a nation where church and state were one in the same and they did it because of religious persecution..."

Anderson closed with, "The testimony of Peter and John and some of the other apostles in Axe Chapters 4 and 5, when they were told they could not do what God had instructed them to do their answer to civil authorities was this, whether it is right what God has told us to do you must judge, but we will do what The Lord has instructed us to do. I'm just asking you to recognize there are churches in this very same county who feel this same way."

Johnson said, "I would concur with this county following what El Paso County has done...We are primarily purveyors of truth as pastors...We deserve the exemption that God has granted and that our country has granted, and so I would urge the county to do whatever we can to recognize this very unique position that churches have...I think that the restrictions that are being imposed on churches are just not right, and I would just encourage the commissioners in our county to do what they can to grant the similar exemptions that El Paso County has."

Anderson asked for a second opportunity to address the commissioners, which they granted. Anderson spoke about his family suffering from Covid and a loss of life from Covid-19 this morning. He said, "Our requests are not without an awareness of some potential danger existing for various members of our society, I would agree with Darryl that I think some of this has been exaggerated beyond compare, but asking for exemptions is not a denial in any way that there's something going on in the world, it's just an awareness that civil authority does not have the liberty to restrict the free exercise of it's citizens and it's churches."

The county commissioners thanked them both for their time and for sharing their opinions.

Dennis Smith, County Treasurer reported that the county tax sale will be held next Monday via teleconference at 10 am. Those interested in bidding need to pre-register.

According to Smith, buyers will be contacted with their bid totals bill after the sale and 200-250 parcels will be sold depending on who makes past due payment before the sale. He said 8-10 people have paid their past due taxes today.

Buyers Must Pre-Register By Calling The County Treasurer During Business Hours on Wednesday November 18th. 719 383-3030.

The Phone Number and Buyer Login For the County Tax Sale Teleconference:

The Commissioners Approved the county bills and payroll. 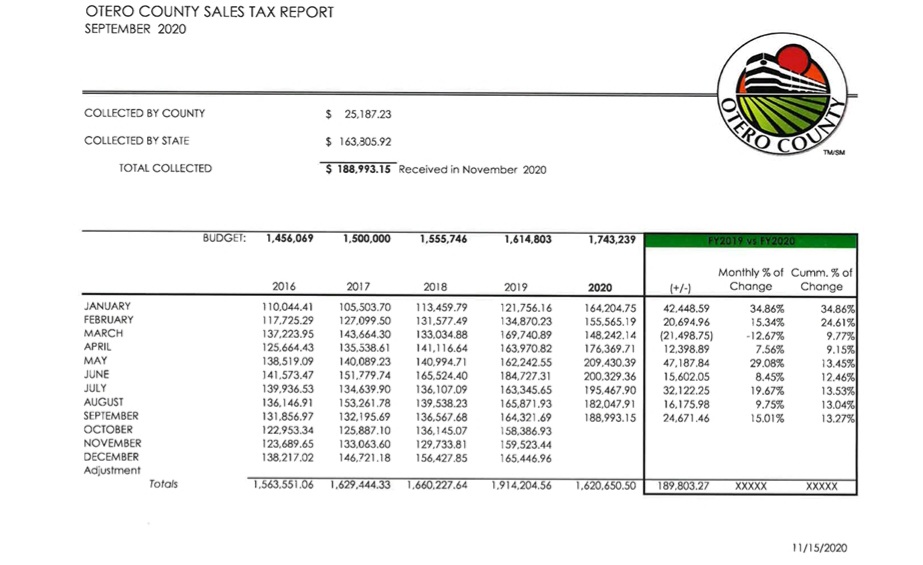 County Administrator Amy White-Tanabe reported during the meeting, she said, "A silver lining of Covid is the increase in county tax revenues. I definitely think we will reach our budget of 1.7 Million Dollars." 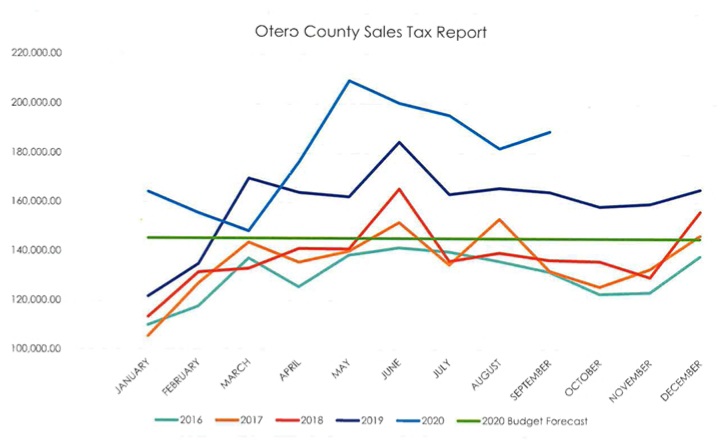 Otero County Clerk and Recorder Lynda Scott reported that they have started the Risk Limit Audit, which should be completed by Wednesday.

Scott said she wanted to remind everyone that the Otero County Clerk and Recorder's Office is by appointment only due to the reduction in staff because of Covid-19. Scott said, If you have a renewal please use the drop box.

Arkansas Valley River Basin Roundtable met and Amber Weber was appointed to represent the area. She will report back to Otero County as well.

Otero County Commissioner John Hostetler reported that he was working with Bent and Crowley Counties to keep the private Prisons Open as it would be devastating to the economies of Southeast Colorado.

Hostetler said, besides what economic damages Otero would suffer, Crowley County receives 50 percent of their property tax from the prisons and would be devastated.

The Commissioners urged the media to spread the word about the public input forums... 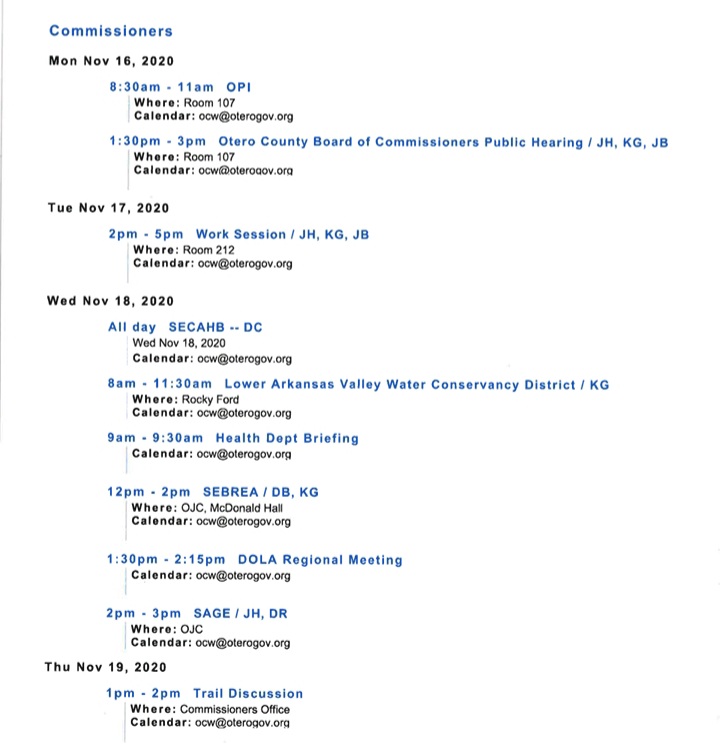