Description: RPI Consulting Gave A Presentation Regarding the Private Prison Studies They Recently Conducted Monday Evening. It was an opportunity for the public to give their input on the closure of the private prison.

Around 45 people attended the meeting virtually through zoom. There were also additional viewers on YouTube.

The Complete Meeting is Available To View Here: 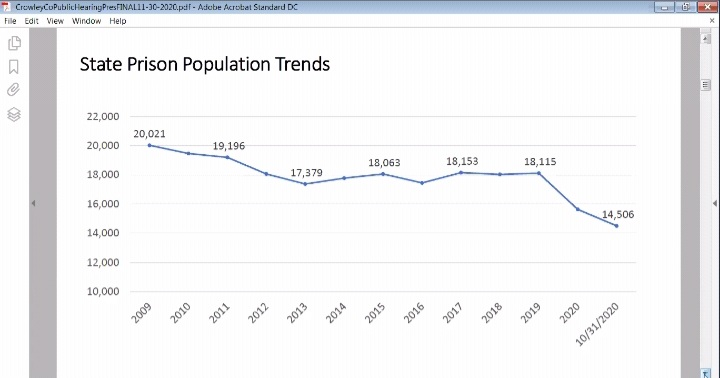 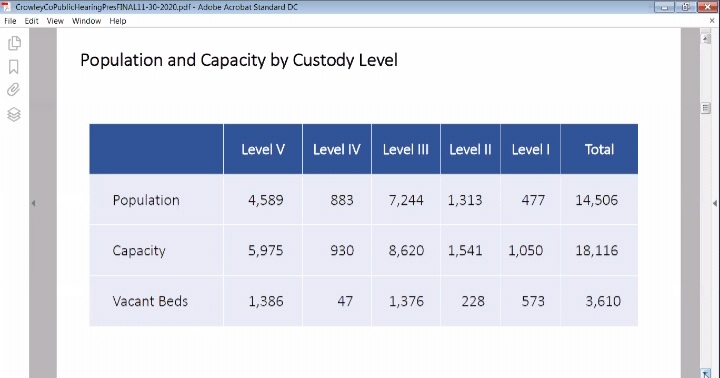 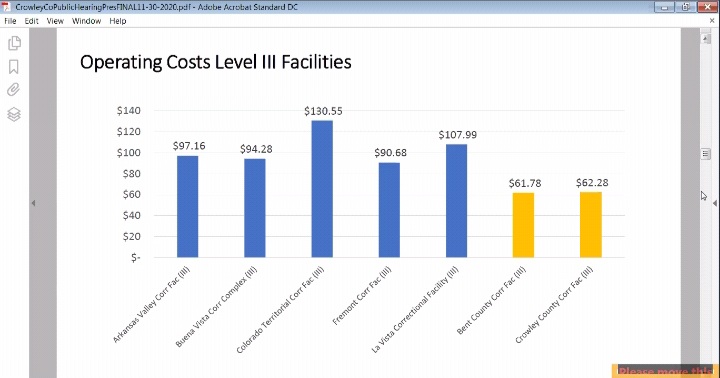 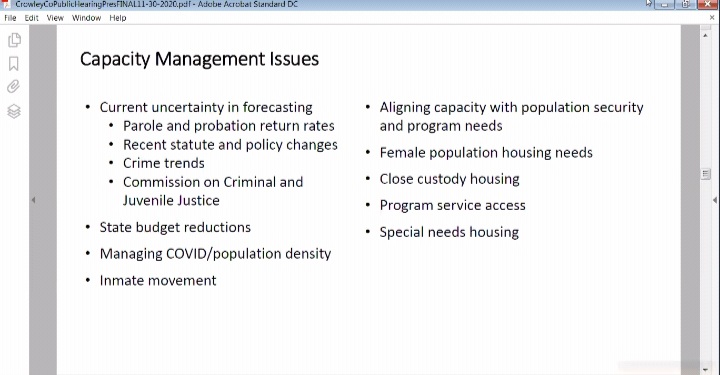 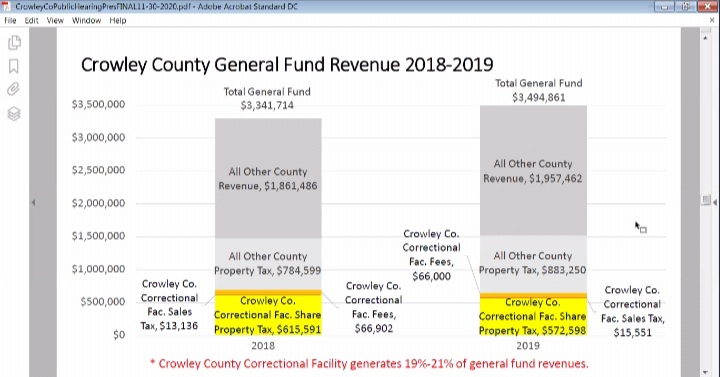 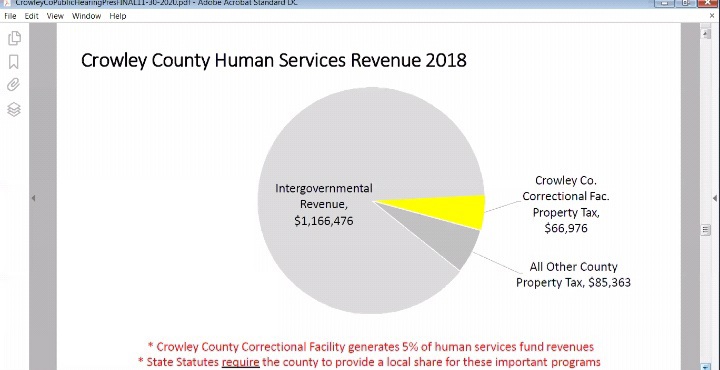 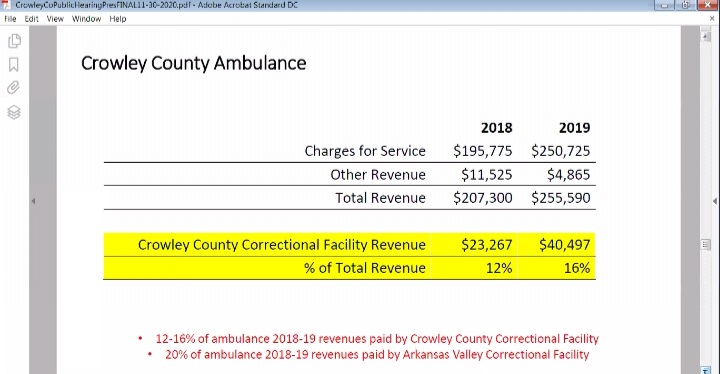 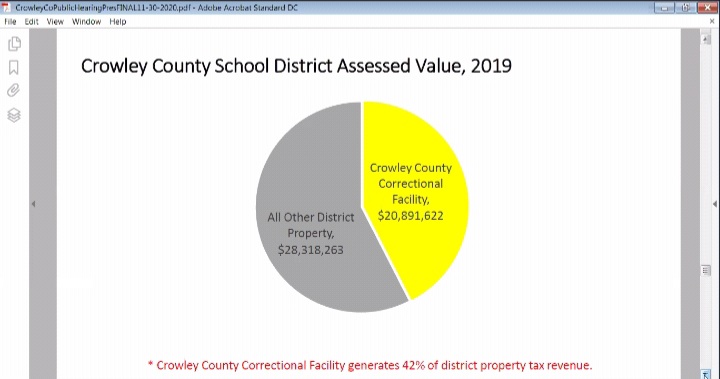 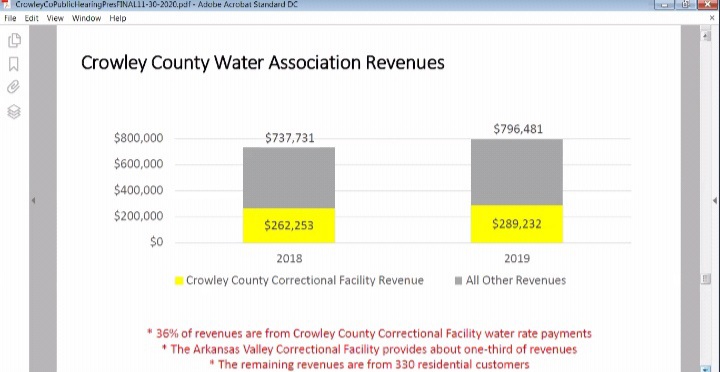 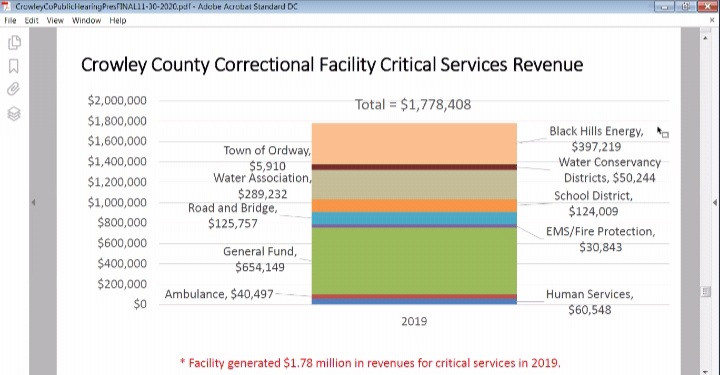 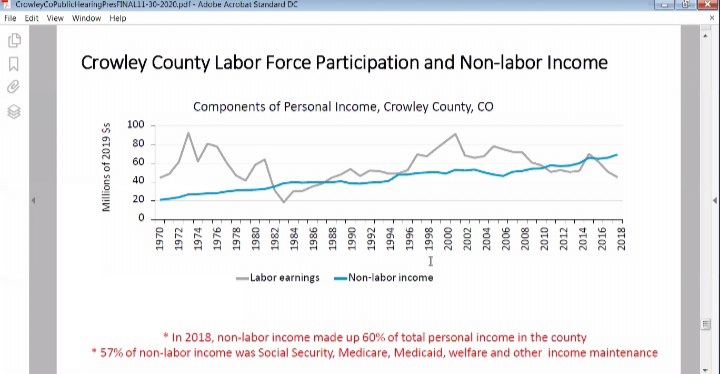 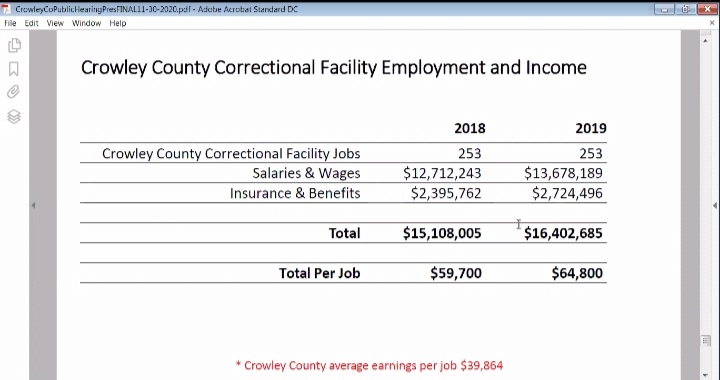 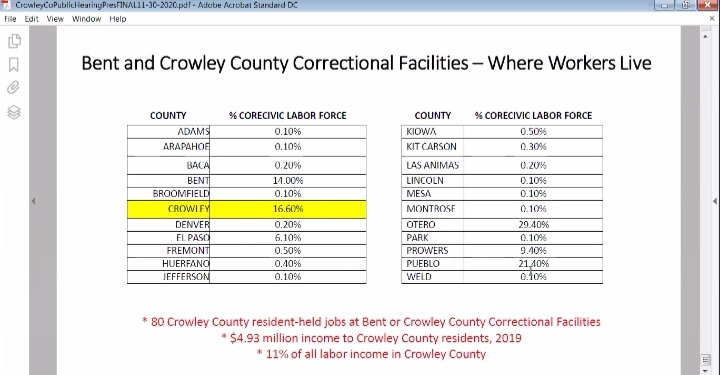 During the presentation Preston said, "Jobs have been flat for a couple decades. It's a tough place to do business, it's a hard place to make money, and the numbers show that."

Crowley County Warden with Core Civic, Berry Goodrich spoke on the issue. He began by sharing a letter from an offender's mother. "I have received numerous letters from the community.'

Goodrich said, "This is one of the better communities that actually has a complete community approach to improving the lives of the offenders."

In 2019 they achieved the safety award because of the quality of their staff at the Crowley County facility, according to Goodrich.

Myra Walter, Administrative Supervisor, spoke next. Her daughter spoke about the support provided by Crowley Correctional Facility to local 4H programs and support of events like their annual Halloween trunk or treat.

Ken Bailer, Vocational Instructor said he has been there for 22 years. He oversees and runs the vocational trade program, there are six good paying jobs there, on an average day they see 145 students.

According to Bailer, The students are taught skills in cabinetry, framing, floor and truss design and manufacturing, as well as stairs. Our vocational programs are community based. Giving these men the opportunity to learn hands on skills and their products are shipped out to companies like Habitat for Humanity.

He recommended a documentary on their wood working vocational program.

Bailer closed with, "The program has a huge financial impact locally beyond the correctional facility."

John Donball, Principal at the Crowley County Correctional Facility, spoke next, "We believe education is the number one success of our inmates in Crowley County...We have dedicated our educational program, just as the vocational is, we have more GED's than any other facility in the state."

Donball said, in 2019, including Bent County, 34 percent of the inmates released in Colorado with educations came from Crowley and Bent County Correctional Facilities. Out of the last six years, five of those six years we had the most graduates in the state. The year we weren't in first place Bent County beat us by six graduates.

Leif Berg with First National Bank gave a brief speech. "Our community is a much stronger community with the prisons here." Berg also serves on the Crowley County School Board, he said that they have seen the numbers steadily decline and they will decline further without the private prison.

Jerry Davis said, I'm a retired pharmacist, I've been in Crowley County for 41 years, I am also on the school board. Every business we have is important, we rely on one another for financial success, when you take away an employer the size of the prison it will impact all of our businesses."

Scott Cuckow, Crowley County Schools Superintendent, said, "I would question the 19-20 percent presented as I would think it is much closer to 50 percent." He went on to say, "I am very tired of the emotional stress placed upon our families annually."

"The GED program and vocational programs speak for themselves," according to Cuckow. The prison closure means, less staff, less course offerings from the school. We would love to expand our services and educational offerings, but need the revenues to do it. Cuckow said, Core Civic is a tremendous asset to our community beyond the financials, the people need to listen to the stories from the families.

Toby Alumbaugh, Crowley County Commissioner gave some economic history. "In the mid-sixties most people had small farms and worked for the sugar factory. When it closed it impacted every family. In 1963 all of the schools consolidated in Crowley County. In the 70's and 80's many of the farmers sold their water. As a result 70,000 acres turned to 7,000 acres in a good year. In 1996 the railroad shut down and the county lost it's largest employer. 1997 they were able to negotiate the private prison opening for business."

Alumbaugh said, "If you do the math the Crowley County facility has saved the state of Colorado a billion dollars, that's a billion with a 'b."

"Please call the governors' office and let your voice be heard - closing our private prison is not good for anybody."

Ed Vela, La Junta City Council Member, spoke to the stresses on the community from covid and the possible impact of closing the prisons. He compared the difficulty of keeping staff at prisons in metro areas compared to the sustainability of staff in the rural area. Vela also asked if empty state prisons could be utilized as jails to relieve the burden of housing offenders.

Vela spoke to the closure of the Fort Lyon facility and how it has been utilized for rehabilitation.

Vela closed with, "The private prisons are essential to the economies and livelihood of the members of our community."

Otero County Health Department Director Rick Ritter spoke about social determinants of health - they are broad and include the economy. Ritter went on to say, "If you want to improve public health, lift people out of poverty. If jobs and incomes are taken away it will make the area further impoverished, which leads to a further decline in community health."

Rick Klein La Junta City Manager spoke next. "The City of La Junta had lost the pickle plant, many of the out of work people were trained to be prison guards, and it worked."

Klein said, "If this goes through it will be devastating to Southeast Colorado."

Crowley County Sheriff Smokey Kurtz spoke next. "I've been dealing with inmates for over 50 years, whether they are in a private or state prison, the thing that helps them return to productive lives is learning a trade like the wood working." Kurtz said, "Please do not let the state of Colorado close down the private prisons. Please wake up and smell the roses if you close these facilities it's going to put these guys back to their bad habits of being criminals."

Kurtz said, "Please tell the governor to mind his own damn business and leave our private prisons alone."

Matt Heimerich former County Commissioner and current farmer shared this, "I would like the governor and proponents of closing the private prison to consider...the effects on the men and women and businesses living in our community. I'd like to challenge them to sleep at night with their decision."

Andrew Rivas is a sergeant at Crowley County Correctional Facility and has been there eight years. "It's a great family, we always help out the community...I stay close the the facility because it's a part of me. We are all just one big family and we don't want to lose it."

Keith Goodwin, Otero Commissioner, said "It's a domino effect, what I'm concerned about is the tipping point. If you lose 30 percent of business, any business, it affects the other businesses in town."

Lynda Elliott, from Olney Springs, said she worked in the mail room, "it was a good job, it was a steady job." She is now teaching. She said, "The effect this has on the children is staggering. If we lose the funding from the private prison I am scared for what's going to happen to those kids. Whose going to love them, and teach them, and help them."

Leonard Talkington spoke next, he said he has been involved with Crowley water management for 40 years. He said, the water association in an effort to supply better quality of water to the prison, several years ago we constructed a well that gave better quality of water and cost about $400,000 and we have spent lots of money buying water shares for augmentation purposes. We have a lot of money invested in it. They use more water than the state prison does. "There are a lot of us around the county who have invested in the private prison." He went on to say, it would not be good for the prison to close.

Duane Gurule, Community Organizer with the Colorado Trust said, "The company is on decline in an industry that is burning down...we can trust that core civic doesn't care about the inmates or their employees they care about their shareholders. And with the shareholder's best interests in mind Core Civics' time in Colorado will be limited. "

Nolan Walter, HBI Construction out of Rocky Ford, "A lot of people don't realize what money comes from the private prison and goes back into the community." This private prison has been a big deal in supporting the water system. Recently with Hwy 71 and Hwy 50 being closed all the traffic has been re routed to Hwy 96. I see the counties trying to fix the roads, but the state isn't. We as a county are hurting on maintenance as it is, but if you take away a company like Core Civic we won't have enough money to keep our infrastructure in good shape."

Commissioner Arbuthnot said in regards to the impact study, "They've offered some good ideas, but they don't come within a thousandth of replacing the revenues from the private prisons. We did hear a rumor that the state wants to purchase these prisons, but all taxes as far as property tax would still go away."

Ritter encouraged residents to let our legislators know how they feel and shared this link: