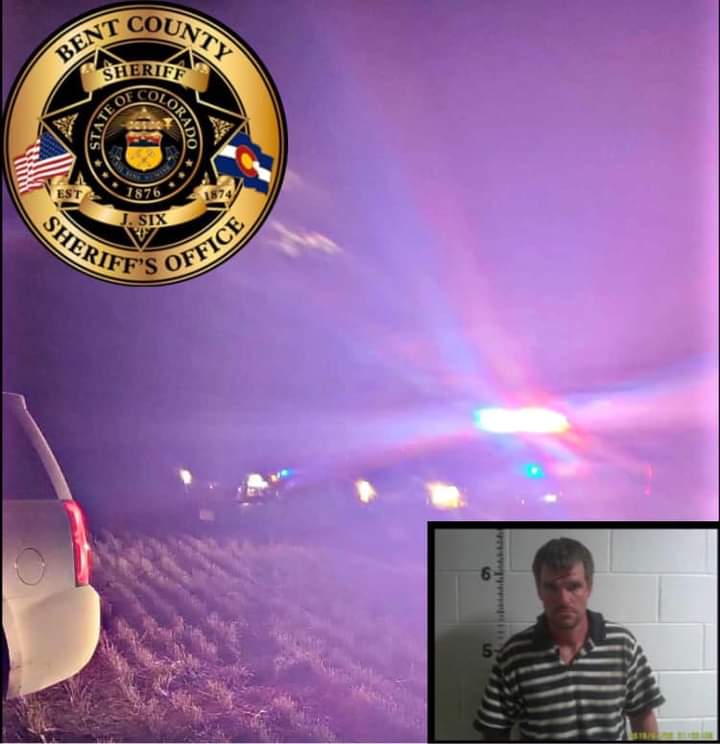 Description: The driver, Justin Brower (06/05/1994) is in custody. During the incident, there were multiple violations/crimes against other motorist, as well as the passenger of the vehicle. (Photo Provided by Bent County Sheriffs Office)

On Tuesday, July 20th, 2021, at approximately 2234 hours a Bent County deputy attempted to stop a white sedan for not having any license plates in the 900 block of Carson Avenue.

When the deputy attempted to contact the vehicle, it began eluding throughout the south side of Las Animas. The vehicle then went southbound onto Highway 101 at speeds up to 107 miles per hour until reaching the Baca County Line.

With the use of multiple county roads, (Baca and Bent), the vehicle ended up making it to Highway 287 north of Springfield. With the assistance of Baca County Sheriff’s Office, the vehicle was stop-sticked. The vehicle then lost control and drove through a cornfield where it proceeded to lead deputies on a chase through two other fields.

The vehicle came to a stop and deputies safely placed the driver, Justin Brower (06/05/1994) into custody. During the incident, there were multiple violations/crimes against other motorist, as well as the passenger of the vehicle.

Brower is being held at the Bent County Jail for the following charges:

Everyone is presumed innocent until proven guilty in the court of law.