Regional collaboration one of the keys to progress, says SCEDD Executive Director 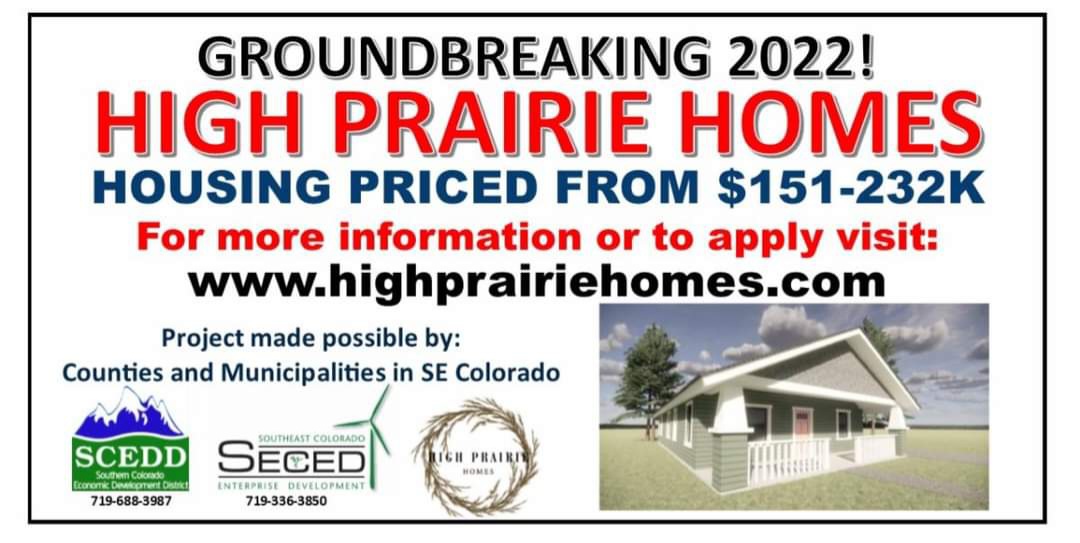 Description: An Update on SCEDD and High Prairie Homes Project. At 1 p.m. on May 25, there will be a public groundbreaking ceremony at Memorial Fields (5th and Moore) in Las Animas, followed by a reception at the Bent County Community Center.

Regional collaboration one of the keys to progress, says SCEDD Executive Director

There are about to be 84 “flowers” blooming in the six county region known as the southeastern plains. These “flowers” are housing units—17 single-family units and 34 duplexes--designed and built by High Prairie Homes. A southeast plains housing committee selected them in a competitive process to make a dent in the workforce housing crisis in the six-county region that includes Bent, Kiowa, Crowley, Otero, Prowers, and Baca.

At 1 p.m. on May 25, there will be a public groundbreaking ceremony at Memorial Fields (5th and Moore) in Las Animas, followed by a reception at the Bent County Community Center.

This is a victory lap in efforts to provide housing in the face of rising interest rates, an overheated market on the front range and the mountain West, and a stagnant housing market in eastern Colorado.

Most of these homes have been purchased by 4 Points Funding to increase the rental stock in the area and the balance are being built for owner occupancy.

This is a success--and success has many parents.

I am honored to serve as executive director of Southern Colorado Economic Development District (SCEDD), a non-profit that since 1968 has been working to make southern Colorado prosper. We are funded by a small grant from the Department of Commerce, dues from 12 counties, grants, and program fees. Yet this is not primarily the story of SCEDD; this is a story of working together and the power of regionalism.

This housing is the result of a Congress and Administration passing the American Rescue Plan and six county governments and 10 municipalities pledging a portion those grants to buy down development costs. This housing is a result of the board and Stephanie Gonzales’ leadership at Southeast Colorado Enterprise Development (SECED). They have been the organizers and holder of the purse as this project went from an idea by senior staff at SCEDD to an implementable plan. The local economic development organizations have been instrumental in this effort as well.

Within SCEDD, this housing is the result of the vision and experience of Michael Yerman, a seasoned municipal planner who brought his housing experience in Crested Butte to our region. Brent Frazee, who lives in Wiley and breathes the idea that the southeastern plains is truly “God’s Country,” helped shepherd homebuyers through the process. John Fulton has been surveying, cajoling, and organizing for more than a year. Miriam Neff kept the train running on time and provided invaluable communications assistance.

These three are at SCEDD because the Congress and the Trump Administration passed the CARES act, which enabled SCEDD to have two years at becoming more relevant to the region.

We’ve tried to be good stewards of the money from two Administrations—and worked to show that a regional non-profit working with community leaders can make a difference if it places the work ahead of the politics.

SCEDD hired a full-time grant writer (Leslie Mastroianni) and we are open for business with towns, counties, and non-profit organizations. In the region, there are about $500 million worth of needs. A few weeks ago, we submitted nearly $3 million of requests for Congressionally Directed Spending and we just helped Walsh get a nearly $150,000 sewer grant. SCEDD is doing consulting work on housing issues and local planning projects for municipalities that cannot afford full-time planning.

SCEDD is using a $1 million SBA grant to provide services to small business in the area. We have two capable leaders for that program. Jacqueline Armendariz Unzueta is a former staffer for Senator Michael Bennet and Cheryl Sanchez works for the economic development organizations in both Prowers and Baca Counties. SCEDD is completing a study to see how we can assist existing revolving loan funds and increase the access to capital in the area.

SCEDD recently hired Gilbert Armendariz, a career Bell-system employee, to assist in bringing high speed broadband to the are. We have a $.5 million grant to map and plan for the implementation of middle mile assets.

Regional planning, local leadership, and intentional collaboration make our communities better. This week, we define “better” as the coming addition to the housing stock. The answer to the question of “what’s next” depends upon all of us.

(SCEDD provides planning and other services in not only the six counties of the southeastern plains, but also Pueblo, Huerfano, Custer, Fremont, Chaffee, and Lake Counties. Geographically, it is one of the largest economic development districts in the United States. Gubelman has been Executive Director since May of 2020.)