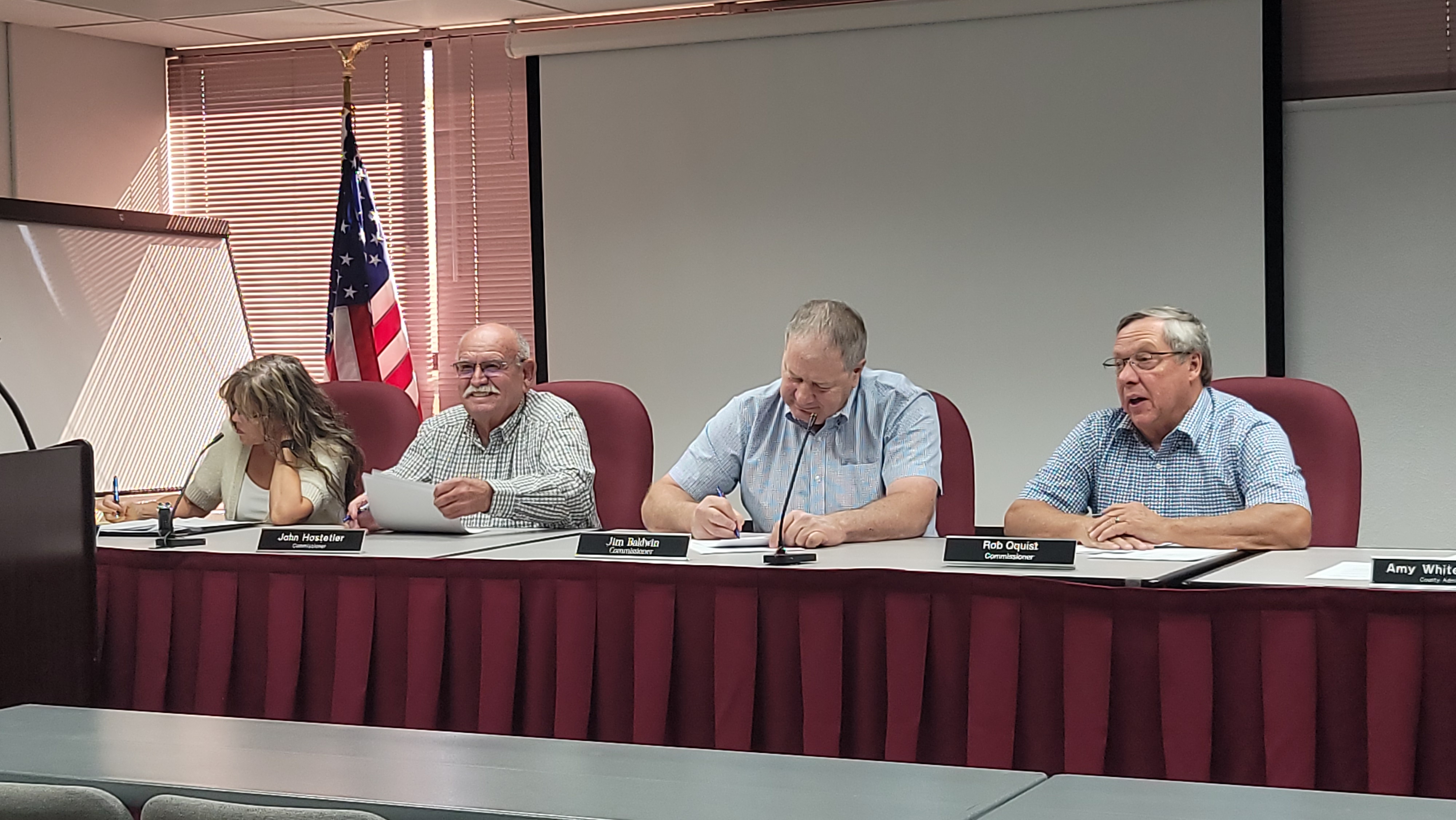 Description: Press Play to Watch the Video... Read the Complete Document Below...

In their regular public hearing on October 10, 2022, the Otero County Commissioners unanimously passed a resolution concerning private land and opposing the presidential order to "develop a program to conserve at least 30 percent of the lands and waters in the United States by 2030."

Whereas, Otero County is a legal and political subdivision of the State of Colorado for which the Board of County Commissioners ("Board") is authorized to act;

Whereas, Otero County contains about 687,530 acres of farm and ranch land situated in Southeastern Colorado; and

Whereas, approximately 29% or 199,000 acres of land within the County is owned or managed under either Bureau of Land Management, Colorado State Trust, or the USDA Forest Service; and

Whereas, conserving lands does not assure its preservation. Left in an undisturbed or natural state, these lands are highly susceptible to wildland wildfires, insect infestation, and disease, all of which degrades the natural and human environments; and

Whereas, the wellbeing, health, safety, welfare, economic condition, and culture of the County, its businesses, and its citizens depend on private land ownership and the use of these lands; and

Whereas, many of Otero County's businesses and citizens are involved in or otherwise depend on commerce that utilizes private lands and their resources, including crop production, livestock grazing, and outdoor activities such as hiking, biking, hunting, fishing, and other recreational activities; and

Whereas, this commerce is an important component of the Colorado economy, feeds the nation and is a major contributor to the economic and social wellbeing of Otero County and its citizens; and

Whereas, in 1960, Congress already designated 443,784 acres in the Comanche National Grasslands with 186,510 acres located in Otero County; and

Whereas, in Section 216 of Executive Order 14008, President Biden directed the Secretary of the Interior, in consultation with the Secretary of Agriculture and other senior officials, to develop a program to conserve at least 30 percent of the lands and waters in the United States by 2030, which is called the "30x30" program; and

Whereas, under the 30x30 program, some 680 million acres of our Nation's lands would be set aside through conservation, preventing the productive use of these lands and their resources; and

Whereas, there is no constitutional or statutory authority afforded to any President, the Department of Interior, the Department of Agriculture, or any other federal agency to set aside and permanently conserve 30 percent of all land and water in the United States, and no such authority is referenced in Executive Order 14008; and

Whereas, placing private lands into permanent conservation status will cause a dramatic and irreversible harm to the economies of many states, including Colorado, and in particular rural counties such as Otero County, whose citizens depend on private lands for their livelihoods and recreation; and

Whereas, Executive Order 14008 at 216(a) directs the Secretary of the Interior, in consultation with other relevant federal agencies to "submit a report to the Task Force within 90 days of the date of this order recommending steps that the United States should take, working with State, local, Tribal and territorial governments, agricultural and forest landowners, fishermen, and other key stakeholders, to achieve the goal of conserving at least 30 percent of our lands and waters by 2030."

NOW, THEREFORE, BE IT RESOLVED by the Board of County Commissioners of

1. The Board opposes the 30x30 program, including its objective of permanently conserving 30 percent of the Nation's lands and waters in its natural state by 2030, or any similar program that will set aside and prevent the productive use of millions of acres of our lands.

2. The Board further opposes the designation of lands in Otero County as wilderness, wilderness study areas, wildlife preserves, open space, or other conserved lands, thereby restricting public access to such lands and preventing the development and productive use of the resources on or within such lands.

3. The Board supports the continued private ownership of land in the County, recognizing the Nation's need for domestic sources of minerals, energy, timber, food, fiber, and recreation.

5. The Board supports reasonable national, regional, and global greenhouse gas emissions policies and goals that are comprehensive, practical, cost-effective, non-draconian, and do not unnecessarily single out specific industries or activities but opposes the use of global climate change as a reason to set aside large tracts of land as conservation lands to fulfill the 30x30 program's objectives.

6. The Board also maintains that any lands or other rights that are acquired to fulfill the 30x30 program's objectives should be acquired only from willing landowners and for the payment of full and fair market value for all rights and interests acquired, and not through eminent domain or any other regulatory compulsion, and only after analyzing and considering the impacts of such land acquisitions on the well-being, health, safety, welfare, economy, and culture of Otero County, its businesses, and its citizens.