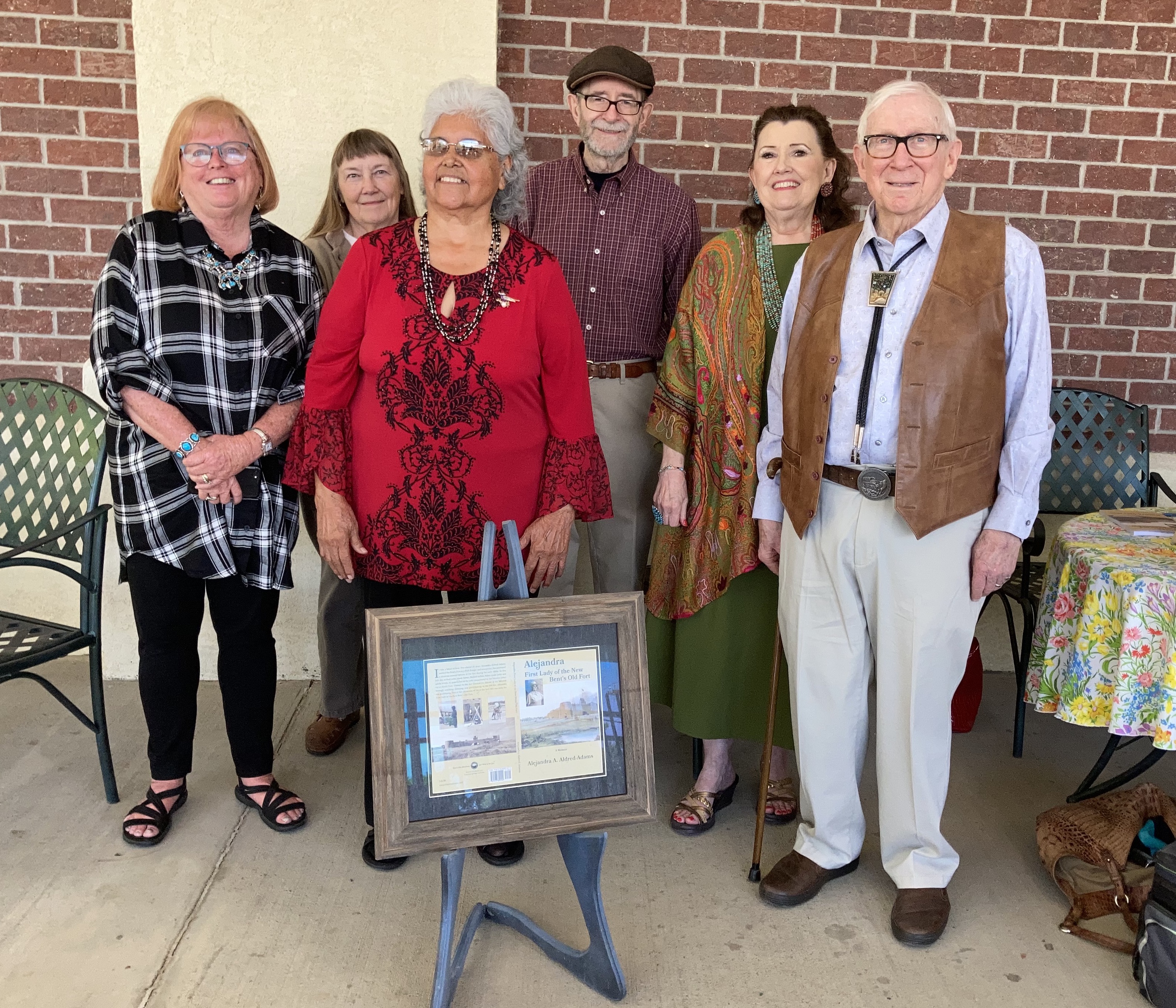 On Wednesday (May 19, 2021) at the Woodruff Memorial Library patio, old friends  visited and congratulated Alejandra Aldred-Adams on her memoir, “Alejandra - First Lady of the New Bent’s Old Fort,” just published by Rhyolite Press of Colorado Springs. Aldred-Adams signed her book as Clara Lee Stafford helped with the money and the greeting of friends.

Aldred-Adams is known for her parties, and the book signing was no exception. There were burritos and floral-decorated cookies for refreshments. The best of times were celebrated by reminiscing about Bent's Old Fort, a major terminal on the Santa Fe Tail saved by the DAR when they began marking the trail in the early 20th century. 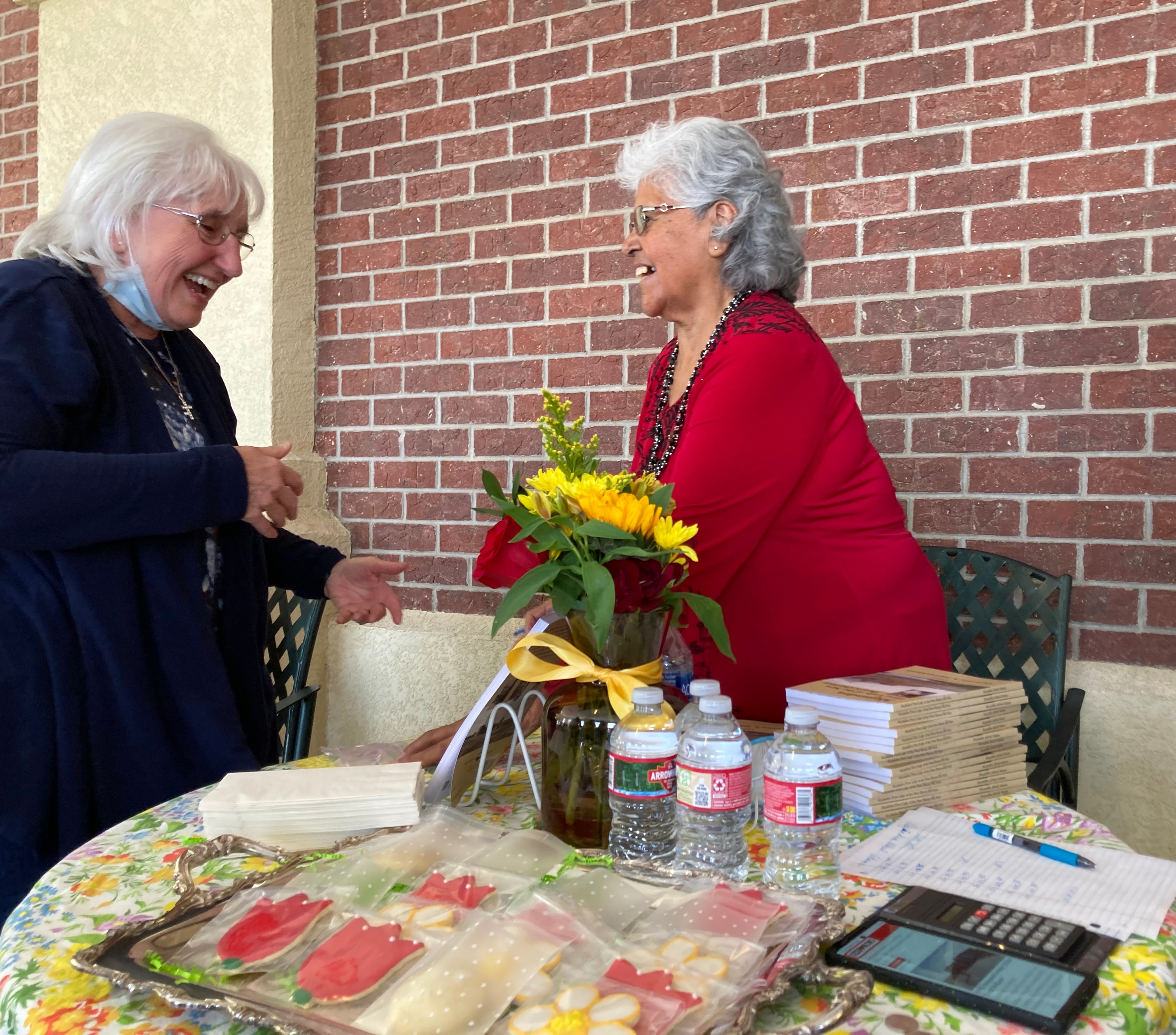 Alejandra was an interpreter at the Fort for many years, having started as a clerk before the reconstruction of the fort was begun in 1975. As she learned the role of the Mexican women, she interpreted their real lives as laborers living at  the fort She rose in the ranks through the years and retired as acting superintendent in 1995.

Alejandra’s starting date was Dec. 16, 1968. She credits her understanding of historical interpretation to the instruction of Robert Davidson, a historian designated Park Superintendent through May 1970. She was acting fort manager for the fort in the absence of the park manager until 1978. She was drawn to the interpretation of a Mexican woman laborer by her Hispanic descent. In all, her tenure at the fort was 27 years, much longer than the life of the original fort, which lived from 1833 to 1849.

The fort was reconstructed from the architectural drawings of cartographer Lt. James Abert of Kearney’a army, the only surviving recorded plans of the fort.

The reproduction of the fort portrays it as it was in 1845-46, during the Mexican War.

(Photo Credit: Bette McFarren) Ernest Martinez and Carol Holsopple Froese enjoy a conversation at book signing for “Alejandra - First Lady of the New Bent’s Old Fort.” In background is Don Kallaus, publisher of the book for Rhyolite Press LLC of Colorado Springs. The signing was held in the patio of Woodruff Memorial Library. Froese was personally involved in Cheraw School’s overnight re-enactment of following the Mountain Branch of the Santa Fe Trail cross-country to Bent’s Old Fort from the Cheraw School.

The memoir also examines the social order of the original fort.  Charlotte and her husband Dick Green had been slaves of the Bent family in Missouri. Charlotte was the much-esteemed cook for the fort. She referred to herself as “the only real lady in the whole Indian country.” She hosted not only meals for the fort, but also parties with dancing (fandangos).

Inside Bent's Fort, business managers and visiting dignitaries, then traders, then skilled workers were served. Mexican laborers lived on the northeast corner of the fort and prepared their own food. The Greens were given their freedom before William Bent abandoned the fort in 1849 for a better location.

This book may be your only chance to learn how to prepare nopalitos. They are made from the buds of the prickly pear plant and used, with spices, to season scrambled eggs and other dishes. “Very tasty and good for you!” comments Alejandra. 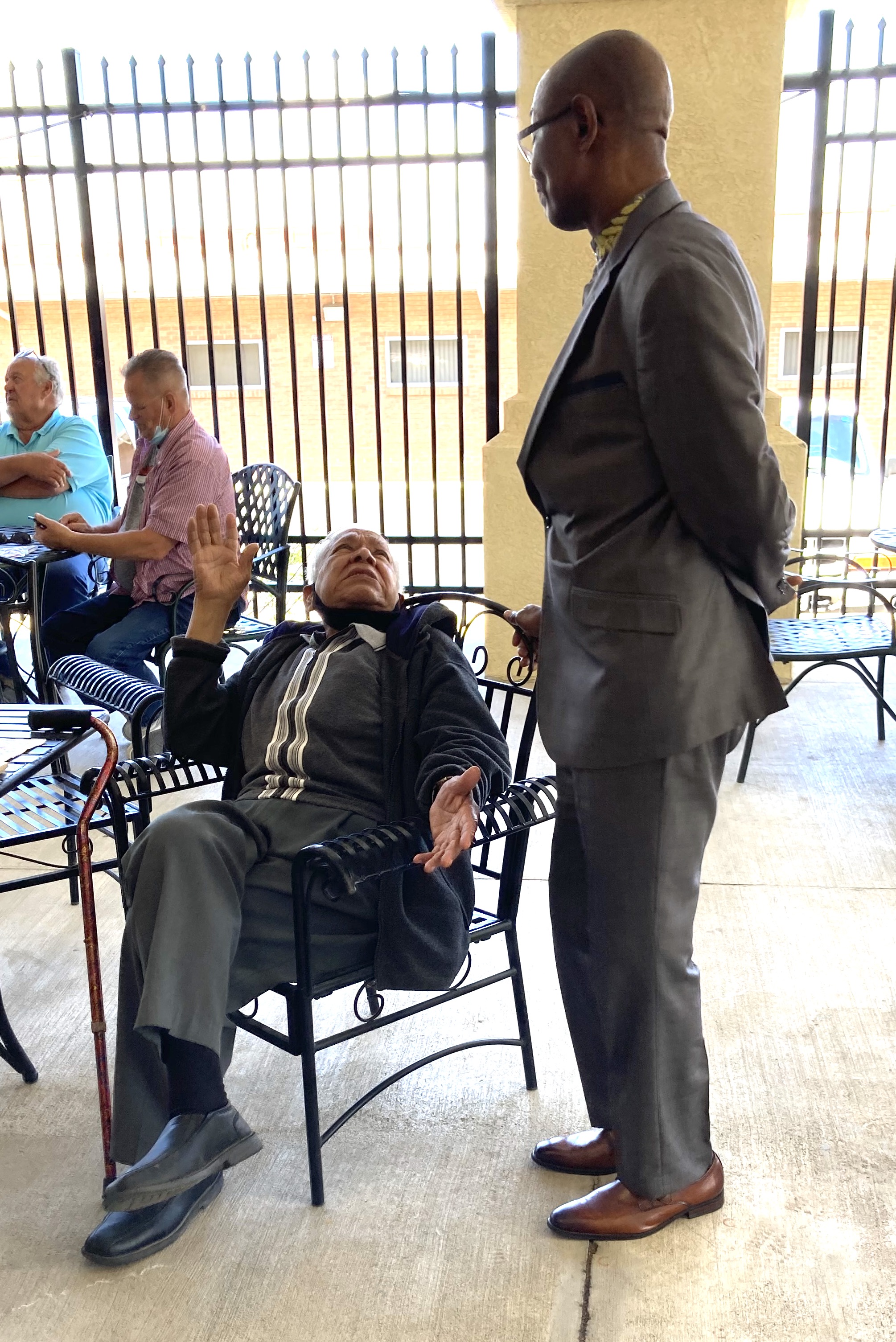 (Photo Credit: Bette McFarren)Ernest Martinez, friend of Alejandra and longtime church elder of Our Lady of Guadalupe in La Junta, talks with Father Alphonsus Ihouma, former priest at the church and adopted son of the author, Alejandra Aldred-Adams. He is now a priest in Minnesota, which he says is actually warmer than Michigan, where he formerly served as priest. Alejandra met Father Alphonsus when he was at Our Lady of Guadalupe/St. Patrick parish in La Junta.

Charlotte and Dick had their own room between the kitchen and the dining room on the south side of the fort, which was built as a square surrounding the square interior patio, with high towers on three corners of the exterior. Mexican laborers from Taos constructed the adobe bricks from which the fort was built and also continuously repaired the structure with mud smoothed on with their hands. The sketches made by Abert of the original fort in 1846 were done while he was convalescing in  St. Vrain’s quarters above the kitchen on the southeast side, with a staircase down to the dining room.

Aldred-Adams goes into details about the many activities centered around Bent’s Old Fort today, telling about them as only an interpreter personally involved can. It is hard to live in La Junta, Rocky Ford or Las Animas without becoming somehow involved with Bent’s Old Fort. From the Kids’ Quarters  to the Christmas celebration, there is something for everyone. Alejandra has seen it all, and written about it with the help of editors and scholars and the insight of an independent thinker. She was only 53 when she retired to take care of her much older husband, pioneer Dell Aldred. First and foremost, she is a team player.