Description: Sculptor Bill Bunting and "The Circle of Life."

Bill Bunting’s art and faith are fused together so tightly it would be impossible to separate them.

“All an artist can do is create what’s already been created,” Bunting said, “I get my inspiration from creation.”

For the fourth year in a row, Bunting has artwork displayed at Bent County Art Guild’s Santa Fe Trail Day Art Show. His larger work, “Circle of Life,” includes a poem he wrote. A smaller piece is a hummingbird visiting a flower.

Bunting was born and raised on the ranch his grandfather homesteaded in the canyon country of southeast Colorado near Springfield. His art reflects his western heritage and interest in Native Americans.

Bunting’s foray into art began when he was a young boy. He said he was always sharpening things to make them into knives. He later became a full-time knife maker, an art he still practices today.

Pulling a small knife out of his pocket, he said he frequently has to replace the knives he carries because people want to buy them. He still likes to take discarded items like saw blades, files, and rasps, and creating knives from them. They are truly “hand-made,” as he holds the blades in his hands throughout the process. Each knife is one of a kind.

Sometime in the early 2000’s—he’s not quite sure exactly when—he bought a plasma torch. He made signs like those frequently seen at the ends of country driveways. In his downtime, however, he branched into sculptures.

Shortly after, the Downtown Springfield Association commissioned 11 pieces, and “it took off from there,” he said.

His sculptures are now found from New York to California and Louisiana to South Dakota, in both public and private collections.

After cutting iron pieces from eleven-gauge steel, he fuses the pieces together, which involves craftsmanship as well as inspiration. A natural process causes the sculptures to rust, which provides a natural protective layer on the original metal. He adds a clear coat finish to further protect the work, allowing it to withstand wind and weather.

His largest piece is a somewhat larger-than-life-size buffalo, “Spirit of the Plains,” that was commissioned by the town of Hudson. Because the town wanted it to be finished in time for the dedication of the building, he had four and a half months to complete the work.

“I knew it was going to be rough,” he said. In the beginning, he worked 16-18 hours a day on the sculpture, but before long he was spending 20 hours a day on it. His wife Cheryl brought meals to him as he was working in his shop.

We said to each other, “It’s a good thing it looked like a buffalo when it was done!” he related. The work included a poem he wrote.

He has sold more than 10 copies of his most popular piece, “With Wings Like Eagles.” Last year a piece featuring a small boy and an old cowboy raising the American flag won first place in People’s Choice in Northglenn. The town is purchasing the piece.

He began writing poetry in 1996, during some hard times he went through. He had never read or written poetry before that. He found himself lying on the floor in his sparsely furnished house, feeling empty. He then said a prayer,  “Lord, show me what you want me to do.”

He then got up and picked up his Bible, which opened to Second Corinthians 5:17, “Therefore if any man be in Christ, he is a new creature: old things are passed away; behold, all things are become new.”

“Then a poem just started to come to me,” he said. “I think it’s a gift from the Creation.”

Since then, he has written everything from humor pieces to “deep spiritual things about life.” He published a book of his poems, “High Lonesome,” which is still available.

He also writes “a somewhat weekly” article for the Kiowa County Independent and the Plainsman Herald, called “Behind the Grindstone.”

Bunting creates an average of three or four pieces a year. He’s currently working on a commissioned piece for the new Building Trades and Ag Building at Lamar Community College.

Even when he’s working on a piece, he’s already planning the next one. “I can’t wait,” he said, “I get halfway done and say, ‘Okay, it’s time to start another one’.” 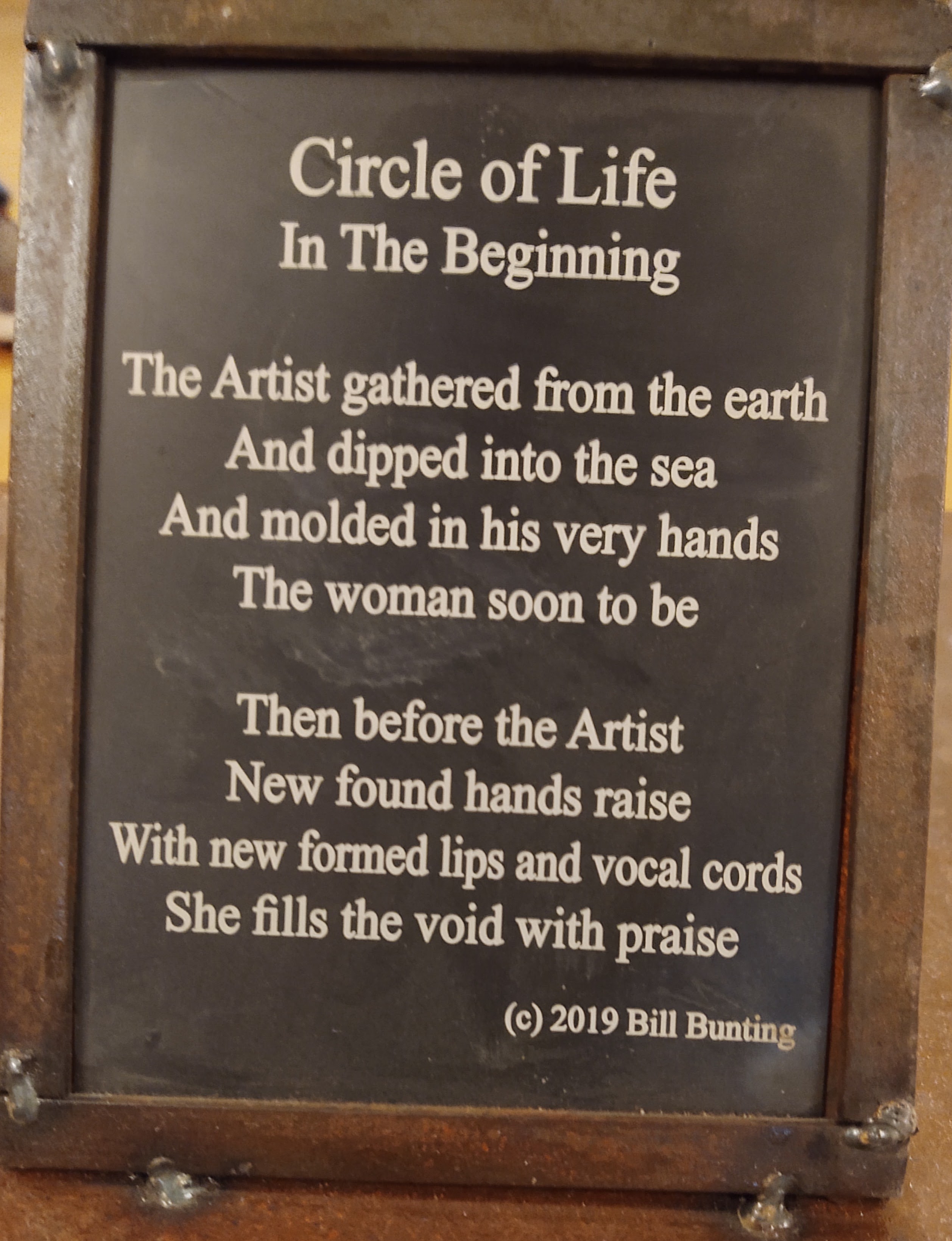 Bunting's poem included with the sculpture. 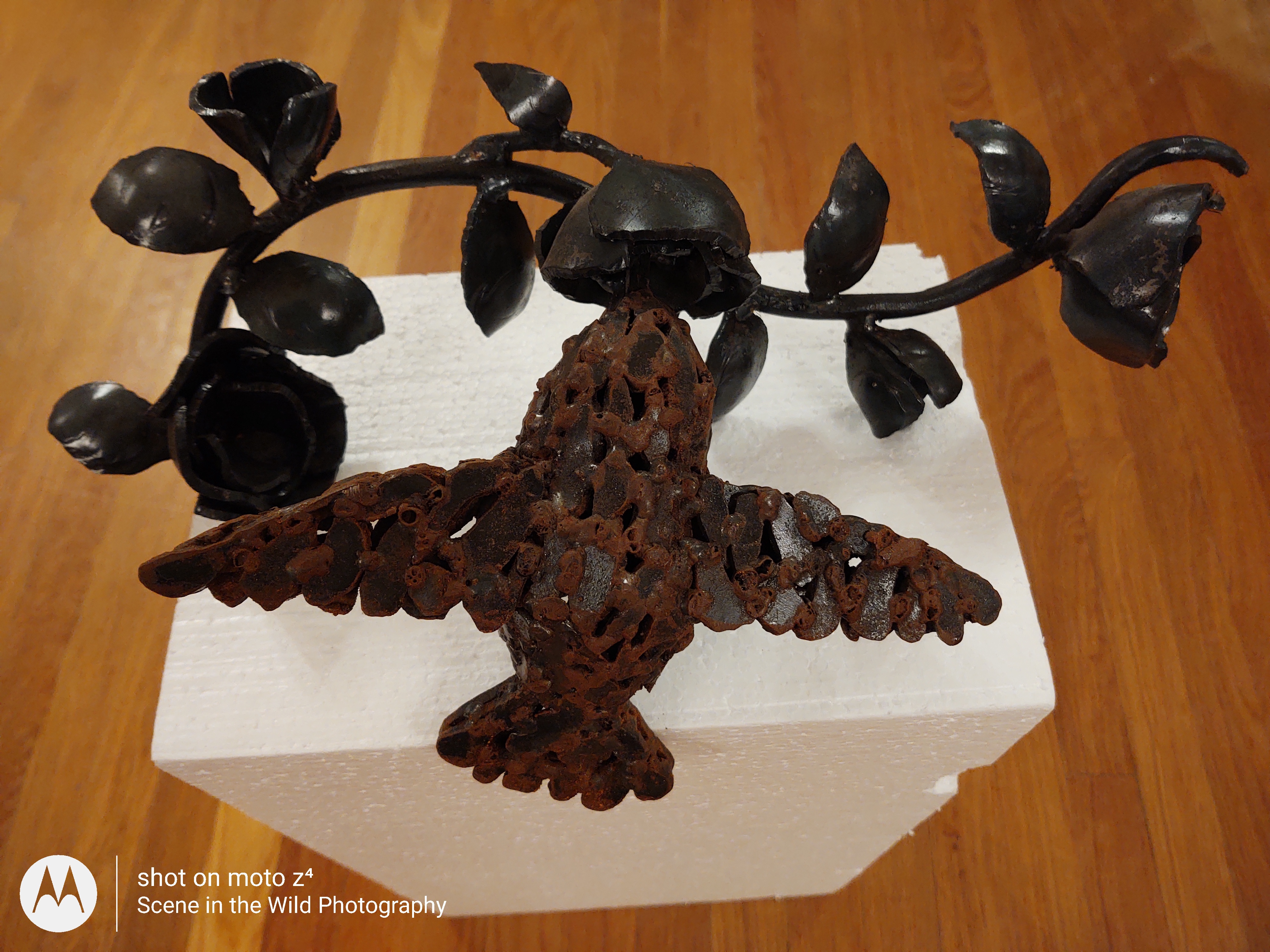 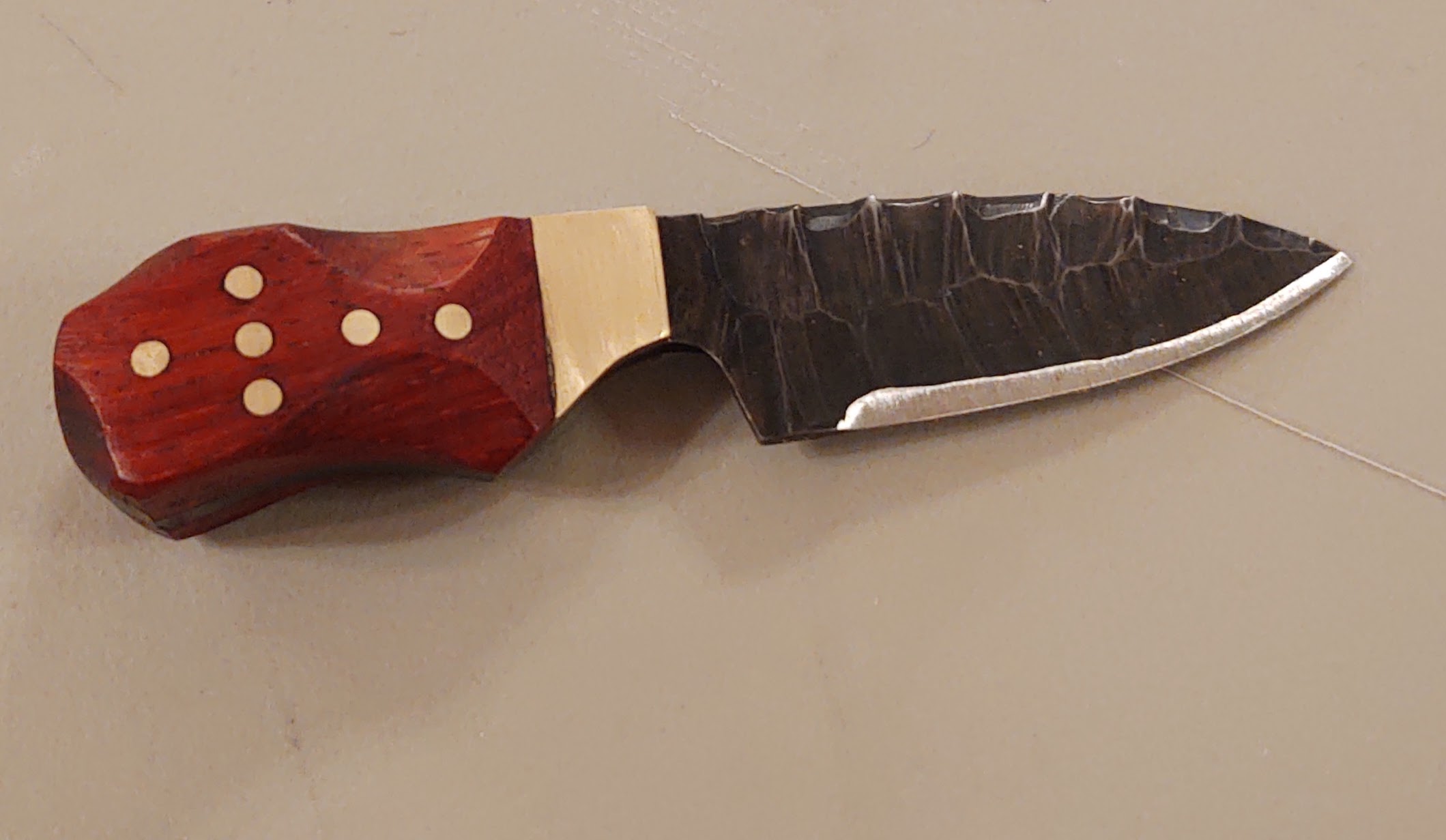 One of Bunting's handmade knives.