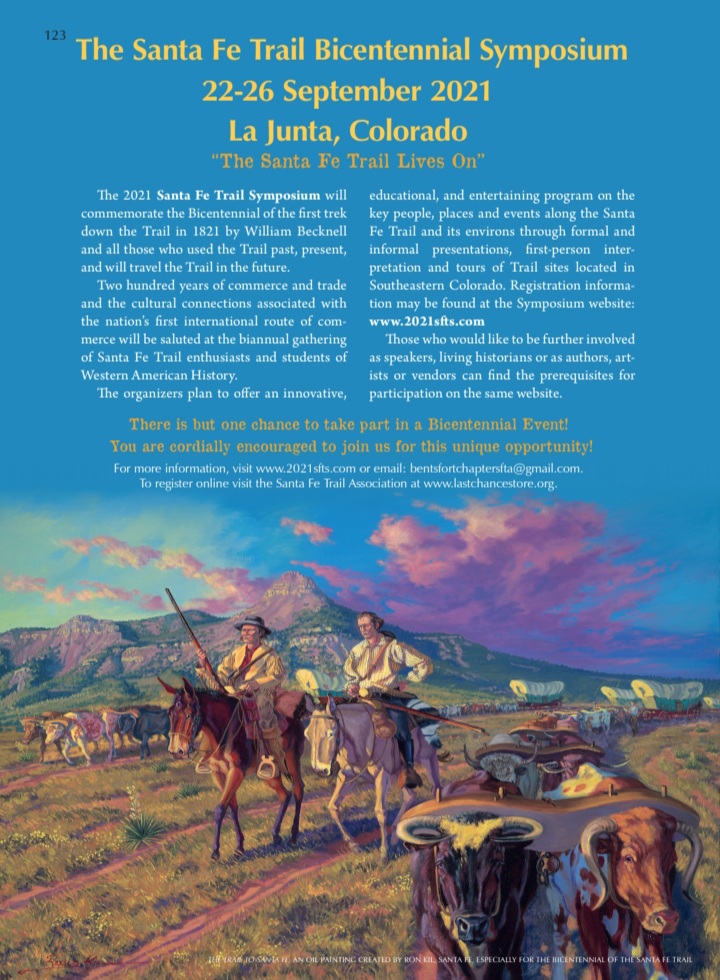 Description: Painting by Ron Kil Commemorating the Bicentennial of the Santa Fe Trail.

"It's a once in a lifetime event," says John Carson, speaking of the National Santa Fe Trail Association Symposium to be held in La Junta and at Bent's Old Fort National Historic Site September 22 - 26, 2021.

Head of the planning committee that has been meeting for four years, Carson, well-known historian, educator, and interpreter at Bent's Old Fort NHS, says this symposium is special because it is a Bicentennial Event  honoring the founding of the Santa Fe Trail begun in 1821.

The Trail was the most important route ferrying trade goods overland between the eastern United States and Santa Fe in northern Mexico.  Beginning in the Independence, MO, area, it stretched beyond 800 miles across Missouri and Kansas, crossed the Arkansas River at what would be La Junta in Colorado and Raton Pass, and down through northern New Mexico.  This was called the Mountain Route, and Bent's Old Fort was the most important stopover on that route.

The 2021 Symposium is expected to have a sizable economic impact on the towns surrounding the reconstructed fort.  Carson anticipates there being upwards of 400 attendees needing motels, restaurants, fuel, and other necessities during the four-day event.  "In addition, this will be another way for local folks to have exposure to these key aspects of history," says Carson, "and for Western history enthusiasts all over the nation to be more aware of southeast Colorado."

Summoning SFTA members and non-members nationwide will be "some of the most knowledgeable speakers on Trail and Bent's Fort subjects; many of the top living history folks to illustrate what life was like along the Trail; and tours to give people opportunities to explore sites east and south of the Fort."  Aside from the Fort, which is one of the finest reconstructions of a historic building in the National Park System, planned symposium locations are Otero Junior College, the Koshare Indian Museum, and the Otero Museum, all in La Junta.

Having guided the National Fur Trade Symposium at the Fort to successful completion in 2015, Carson says he learned many things he needed on the way to 2021.  "Planning is a long drawn out process," he says.  "This must be an effort by a large number of people sharing their areas of expertise, with everyone on the same page.  And advertising, getting the word out to as many forums as possible, is essential."  To accomplish this, in part, caused Carson's enlistment of Ron Kil, a leading Santa Fe artist.  "His meticulously researched painting titled 'Trail to Santa Fe,' showing ox-drawn trade wagons on the Trail in New Mexico, is the subject of certain symposium publicity.

Major partners in the planning have been members of the host organization, the Bent's Fort Chapter of the Santa Fe Trail Association of Southeastern Colorado, including its president and co-chair of 2021 planning Kevin Lindahl of Rocky Ford. 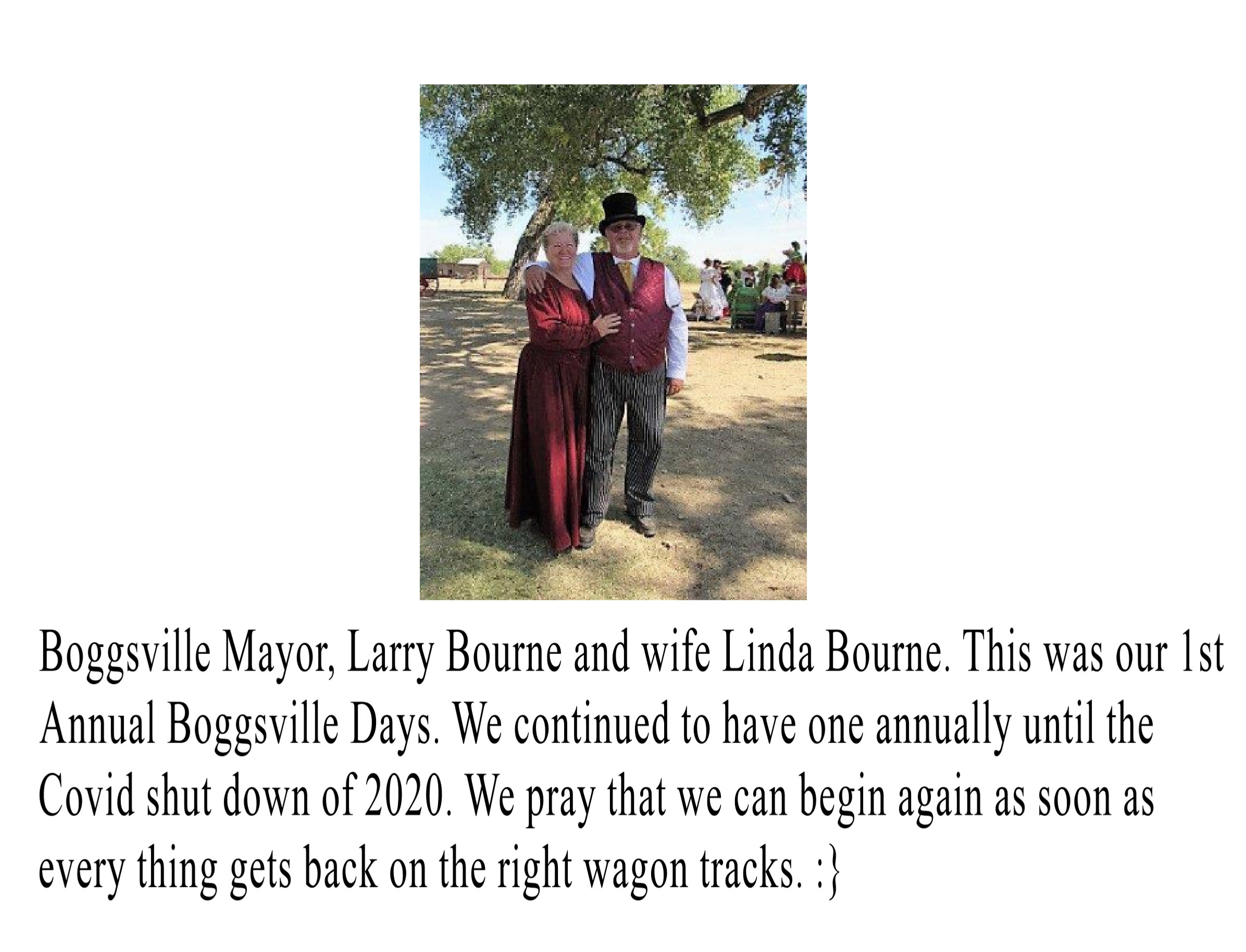 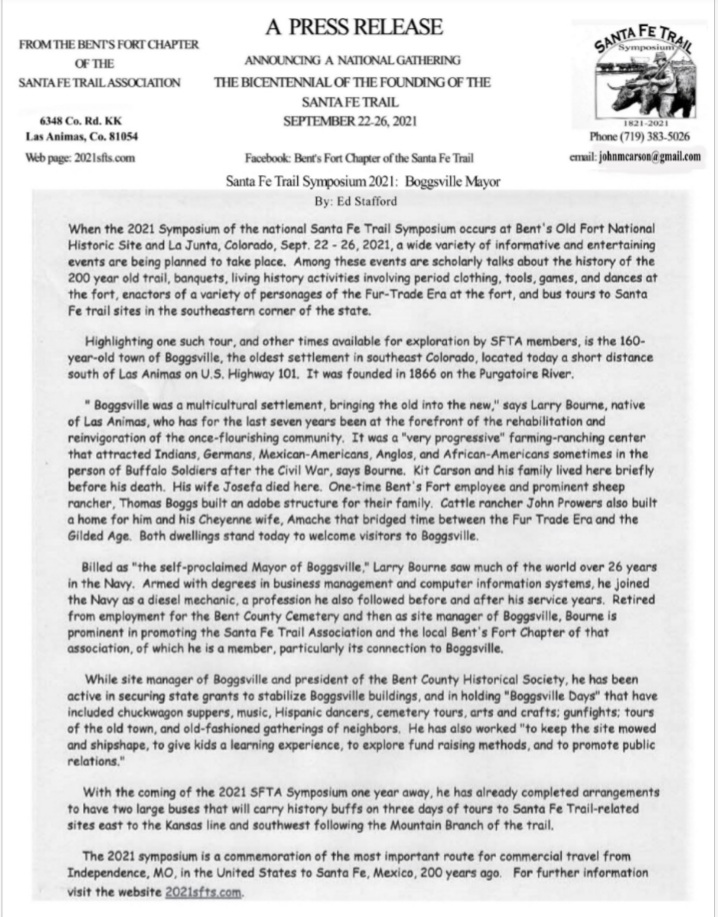 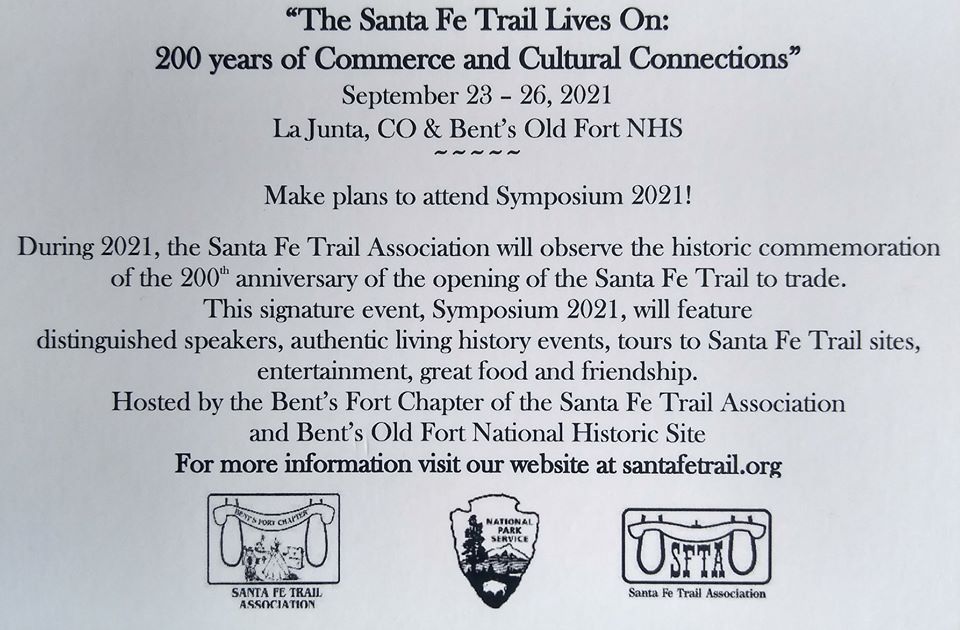 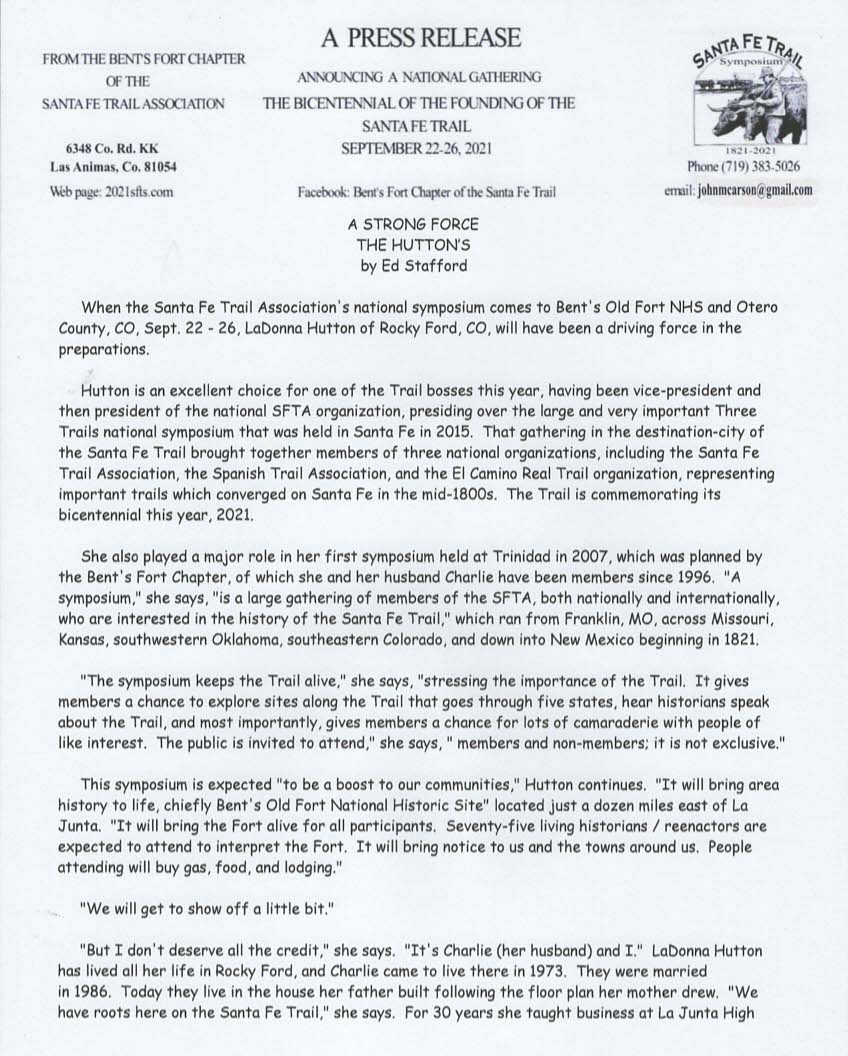 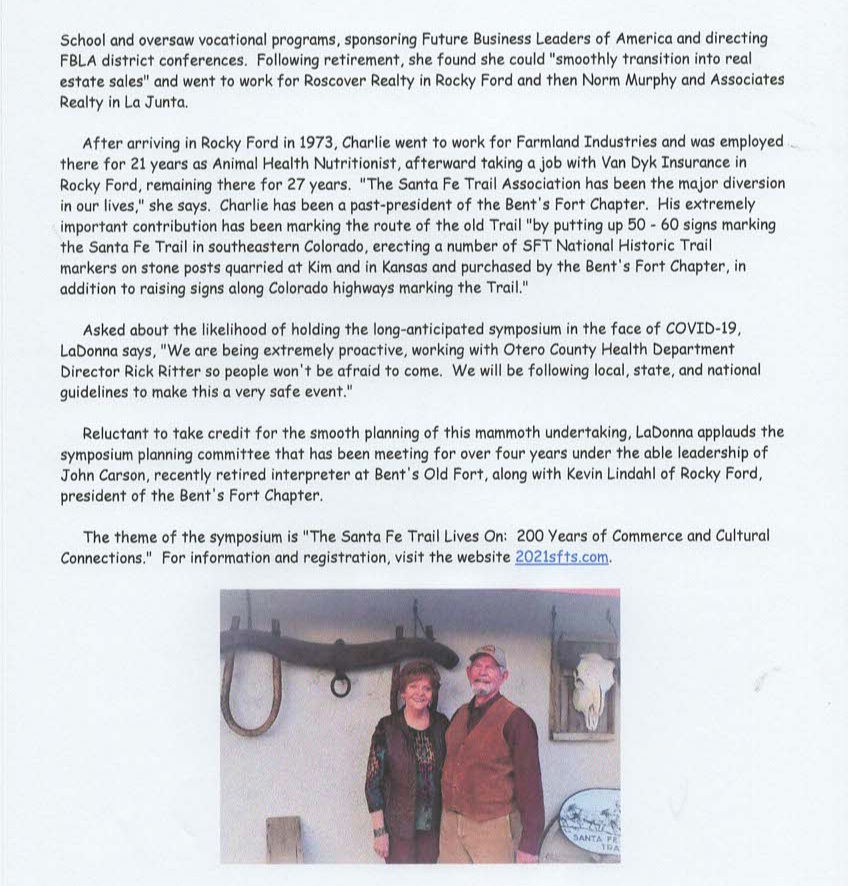 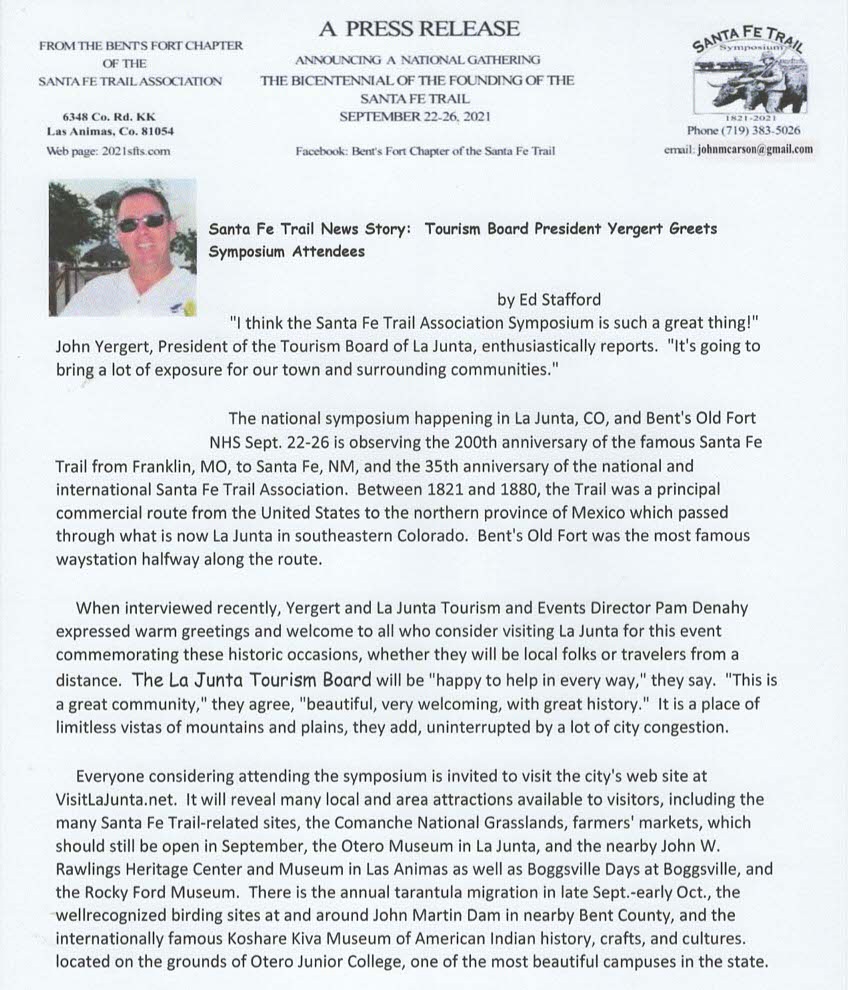 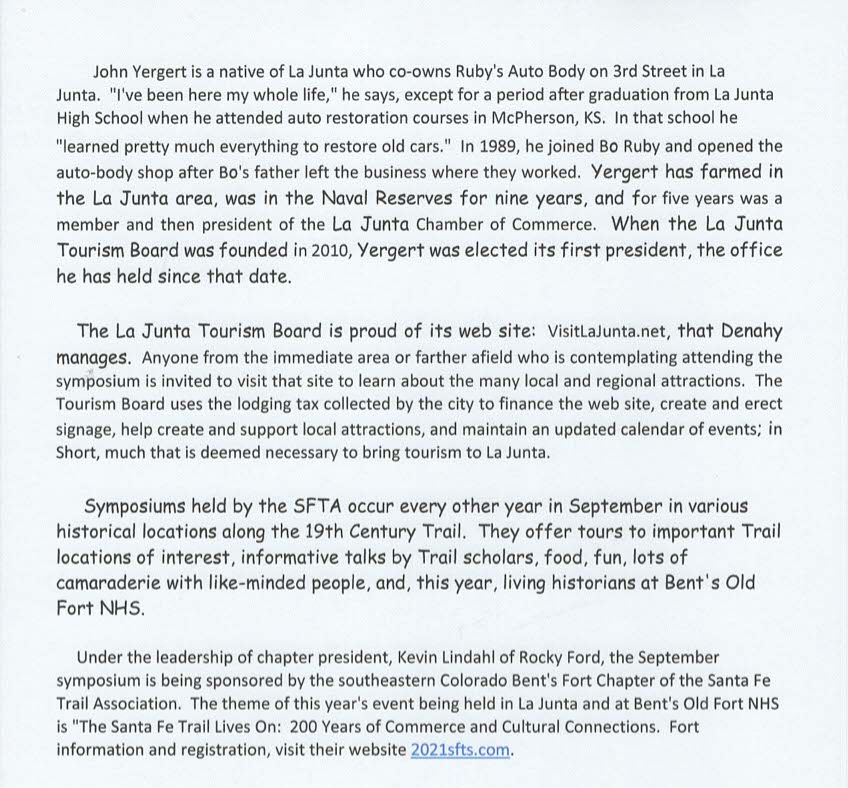