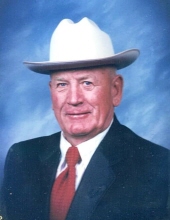 Hans Christian Hansen Jr. passed away at his home on July 13, 2021 at the age of 95. Heaven rejoiced to see this most admirable, inspirational, faithful, and family oriented man join Gerry, his beloved wife. Hans was born January 13, 1926 in the same house where he lived most of his life and took his last breath. He was the son of Hans Christian Hansen Sr and Alma Elisa Kristine Birkholdt Mickelson.

Graveside services will be held on July 21, 2021 at 11:00 AM at Fairview Cemetery in La Junta, Colorado, with a viewing on July 20 from 5:00 to 7:00 PM at Peacock Memorial Chapel in La Junta. Pastor Gail Allen will officiate the celebration of Hans’ life. Pallbearers will be his grandsons, Levi Hansen, Scott Goheen, Geoff Goheen, Chad Ricken, Todd Redner, and Reuben DeLeon.

Hans graduated from Cheraw High School in 1943 and joined the United States Marine Corp. He married Geraldine Watters on January 16, 1949 at Cheraw Methodist Church. He remained an active member of the church throughout his lifetime giving of his time and money, and helped rebuild the church after it burned down. Hans received many awards over the years including The Cheraw Community Service Award and The Agricultural Hall of Fame Award. He was a charter member of the Cheraw Lions Club and served on numerous boards including the La Junta Rural Fire District and Timber Lake Grazing Association as president for many years. He also was an Advisory Board Member to the CSU Extension Station in Rocky Ford.

Hans was devoted to his family, raising two sons, Larry and Donny. He built the family farming and ranching business, Hansen Cattle Inc and actively farmed well into his senior years. He loved hunting and reading; but loved his family even more. His grandchildren and great grandchildren were very special to him and to have them around would make his day.

Hans was preceded in death by his wife, Gerry; his parents, Hans Christian and Alma Hansen; his daughter, Cheryl Dianne Hansen, his brother, Richard, and sister, Thelma.

In lieu of flowers memorial donations may be made to Cheraw United Methodist Church or Arkansas Valley Hospice.