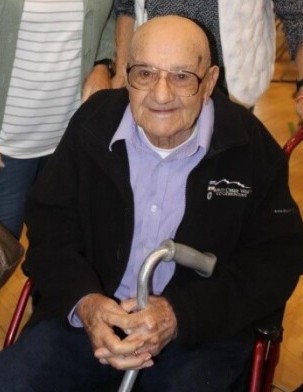 Description: William, Bill, Miller Obituary... Our Heartfelt Condolences To His Loved Ones...

A Mass of Christian Burial for lifelong Bent County resident, Bill Miller will be held at 10:00 a.m. and Rosary at 9:30 a.m. on Friday, April 8, 2022, at St. Mary’s Catholic Church in Las Animas, Colorado.  Inurnment will follow in the Fort Lyon National Cemetery at 11:30 a.m. with military committal rites provided by American Legion Post #6 and V.F.W. Post #2411.  Per Bill’s request cremation has taken place and there will be no visitation.

William “Bill” Miller was not famous, but he was an honorable man that was very important to his family and those who knew him. He lived in Bent County his entire life but saw the other side of the world. Bill was the fifth of six sons born to Alex and Katherine (Krapp) Miller, with two sisters completing the family.  Bill was born February 15, 1925, in the Horse Creek community, west of Las Animas.

In 1929, the Alex Miller family bought a farm and moved to the Kreybill community, east of Las Animas.  The family built their new home in 1936. The dirt they dug for the basement was used to make adobe blocks for the walls and exterior of the house.  Bill completed eight years at Kreybill School and then rode his bike 10 miles to town to attend Bent County High School, graduating with the class of 1942. He met the love of his life at a wedding in Kansas in 1950. A few months later, in the midst of the Korean Conflict, he was the first young man from Bent County to be drafted. He was assigned to serve in Germany during the post-World War II reconstruction period.  After completing his military service, Bill and Bonnie Chizek were married October 27, 1952.  They purchased their farm and life-long home in 1955, located a half mile east of Las Animas, where they raised their eight children, farmed, and embraced life. Bill was interested in water conservation and was in business with two of his brothers, building cement irrigation ditches. Bill and Bonnie farmed, raised sheep, cattle and pigs, also chickens, rabbits, geese, and peacocks. He enjoyed giving farm tours to many students and welcomed all who came to visit. His door was always open, and he cherished family visits and celebrations. Bill was an active member of St. Mary’s Catholic Church. He served on the Parish Council and was involved in many other church activities.

Bill is survived by his children, Tim (Tammy) Miller, Nancy (Bill) Long, Cynthia (Phil) Quarles, Loret Davey, Michael Miller, Regina (Steve) Brorman, Monica (Scott) Cox, and Anthony Miller; seventeen grandchildren and 31 great grandchildren. Bill was the last survivor of his siblings, and many nieces and nephews called him Uncle Bill. He had countless friends and it was important to him to always be humble, thoughtful, and friendly to everyone he met.  Bill treasured being a farmer and living on the farm. After Bonnie passed away May 24, 2021, his children assisted with his desire to live at home, where he was able to remain until the angels came and got him, March 26, 2022, at the age of 97.

Arrangements are being handled by Valley Memorial Horber Funeral Home.