The Crystal Mill - One of Colorado's Most Photographed Places 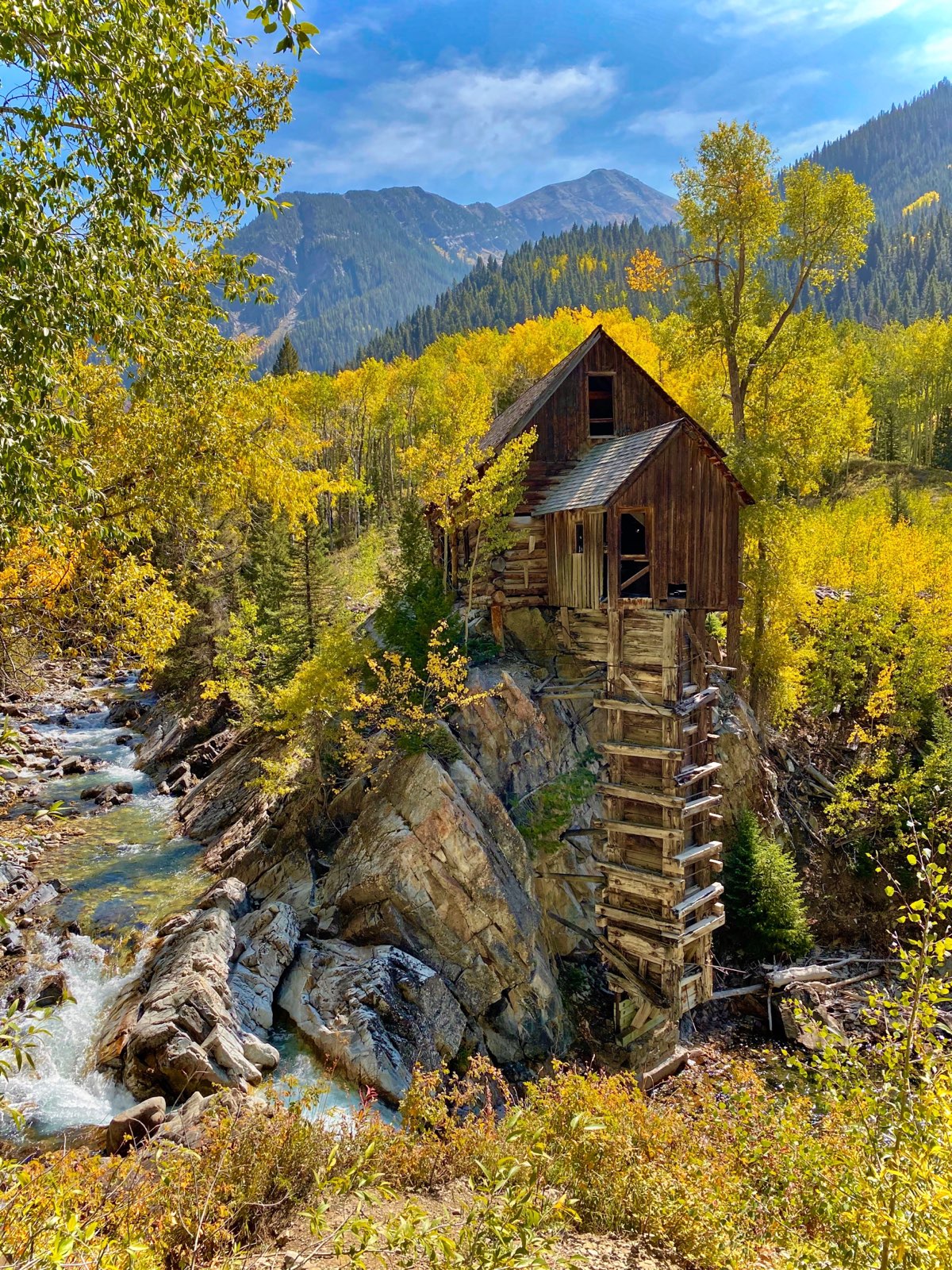 This structure located at Crystal City is considered by some to be the most photographed site in Colorado. It was constructed in 1893 by George C. Eaton and B.S. Phillips, promoters of the Sheep Mountain Tunnel and Mining Company, as a power plant for the Sheep Mountain Tunnel. It was originally known as the Sheep Mountain Tunnel Mill and the name was commonly shortened to "Crystal Mill," though later writers sometimes called it by other names. It contained a horizontal wooden water wheel, turned by two one-inch water jets, at the base of the penstock shaft at river level, and this powered a large air compressor. Power was transmitted via a steel driveshaft up to the gear house on the front of the building, then to the compressor by a wide leather belt. The air was carried to the mine entrance by a 3-inch iron pipe, across the river and up to the base of Sheep Mountain. This compressed air powered the air drills and provided ventilation for the tunnel which in 1893 extended over 1500 feet into the mountain. The mill building has a privy in the overhanging corner which emptied directly into the river. The back end of the building contained a sleeping room for the attendant. In December 1893 the mill began operation, in spite of the 1893 silver panic, and continued sporadically until sometime in the 1920' s.

River water powered the water wheel and a wooden dam above the falls raised the water level to the top of the penstock shaft. High water runoff the next spring after construction washed out the dam. It was rebuilt, and when it again washed out, water was obtained by building a long wooden flume which tapped the river far upstream on the east end of Crystal. Remnants of this flume can still be seen on the south side of the river.

As the mine began to produce rich silver ore a stamp mill was built to the west of the mill to crush and concentrate the ore for shipping. It contained three large timbers tipped with iron which were raised and dropped to crush the ore, and powered via a 12-inch wide leathe: belt from the power house. Evidence of crushed ore can be seen across the river but little other remains of the stamp mill exist. This structure never contained a saw mill and the power house never had an electric generator.

The Crystal Mill is privately owned and not open for public inspection. Anew wood shingle roof, just like the original, was installed in 1976 with help from a Bicentennial Grant of $2500, and public donations. In 1984 several volunteers, with the advice of an engineer, installed supporting cables inside the building to raise and secure the gear house, which was pulling away from the building and in danger of falling into the river.

Located in the Rock Creek Mining District this old power house is a picturesque remnant of the intense prospecting and mineral extraction activities which accompanied and supported early settlement of this area.